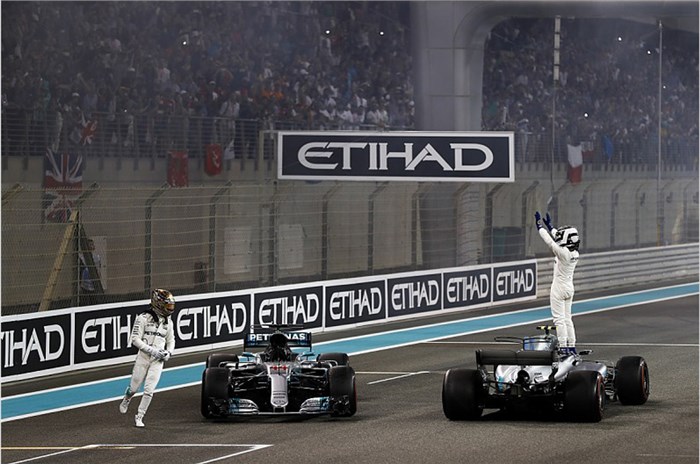 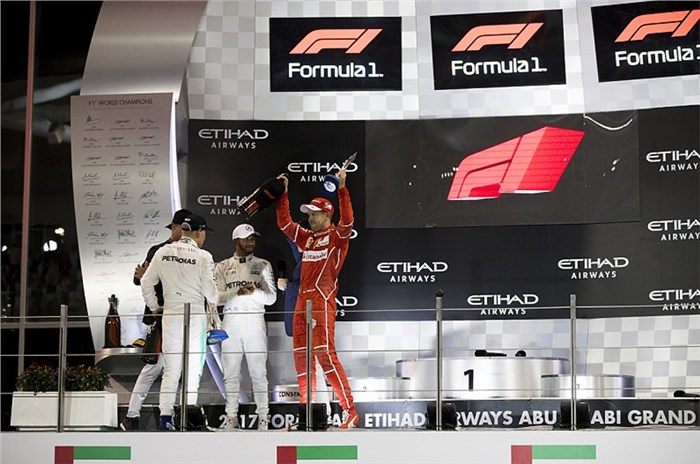 Resisting Lewis Hamilton and maintaining a lead from pole at the start, Bottas has finally taken his third podium finishing the Abu Dhabi grand finale at the Yas Marina Circuit.

Bottas was signed as a last-minute replacement for Nico Roseberg, in 2016. His contract was extended as team Petronas' second driver in September 2017, after Roseberg took retirement.

World champion Hamilton came 3.8 seconds after Bottas and was followed by Ferrari’s Vettel, who took the last place on the podium.

Just after taking the lead in Turn 1, he quickly took a one-second lead over Hamilton and gradually build it up to two seconds. He was the first of the Mercedes drivers to pit, swapping the ultra-softs for super-softs and rejoining in second place.

Hamilton remained behind for three further laps, clocking the fastest lap in the process, however couldn’t come close to Bottas and rejoined behind to take second place.

Hamilton did try to attack Bottas by getting within DRS range, but locked up at Turn 17, running off track before re-joining. Just when Hamilton had built up the pressure and got within 0.5 seconds after his team-mate, Bottas responded by putting the hammer down and pulling away.

As a result of this healthy in-house competition, Mercedes stood first and second for the third time in the season.

For Vettel, it was a quiet race in lonely third place ahead of Ferrari team-mate Kimi Raikkonen.

Red Bull's Daniel Ricciardo was on course to finish fourth, but pulled off track and retired the car with a hydraulic problem shortly before the halfway point.

His team-mate Max Verstappen finished fifth, just 0.8s behind Raikkonen with Nico Hulkenberg finishing sixth, securing sixth place in the constructors' championship for Renault. Hulkenberg was given a five-second penalty for leaving the track and gaining an advantage when battling Sergio Perez on the first lap.

Renault’s second racer and Hulkenberg’s team-mate, Carlos Sainz Jr retired for the fourth time in six races as the team did not attach the front-left tyre properly at his pit stop. Despite the incident, Sainz had been on course to leapfrog Fernando Alonso and Felipe Massa into ninth place by running long before pitting.

Massa completed his 269th and final grand prix in the points at 10th. He had been ahead of Alonso in the first stint but the McLaren passed the later-stopping Williams on its out-lap.

Romain Grosjean was involved in the race's most entertaining battle, squabbling with Lance Stroll over 13th in the first stint and eventually coming out on top after multiple passes and repasses.

The Haas driver finished 11th, ahead of Stoffel Vandoorne, with Kevin Magnussen recovering from a first lap spin that dropped him to the back of the field to finish 13th.

Stroll stopped three times at the pits while everyone else stopped once and fell to last.