It was business as usual as Sebastian Vettel led the way in Friday practice, with Mark Webber coming home second. 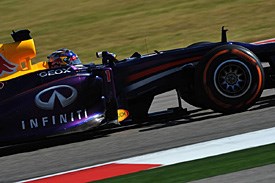 Following the disjointed morning session hampered by both fog and a failed medical helicopter, the Formula 1 teams were able to get plenty of trouble-free running in the afternoon.
To little surprise, Vettel was the pacesetter for most of the session. He was swiftly down to a benchmark 1m38.211s lap on the hard tyre.

Although Nico Rosberg and Webber popped in front by switching to mediums sooner, Vettel's 1m37.305s on the softer rubber put him on top again.

Webber ended up 0.115 seconds slower in second, both Red Bulls having shown good long-run pace too.

Rosberg remained best of the rest in third, ahead of Mercedes team-mate Lewis Hamilton.
Lotus's new recruit Heikki Kovalainen managed to complete 41 laps as he got used to Kimi Raikkonen's former seat, and was an impressive fifth quickest. The Finn was 0.182s faster than team-mate Romain Grosjean in eighth.

Sauber had a strong day as Esteban Gutierrez repeated his rapid morning form in sixth, followed by team-mate Nico Hulkenberg.

Jenson Button's McLaren and Fernando Alonso's Ferrari completed the top 10.
Williams had been rapid in practice one, but Valtteri Bottas was only 16th in the second session, with team-mate Pastor Maldonado two places further back and quick to express his unhappiness via team radio.

Much of the final part of the session ran under yellow flags after Max Chilton went off at the last corner with what he suspected was a brake failure on his Marussia.

The tractor vehicle sent to recover the car got into some difficulty, before finally managing to clear the car away.