Sebastian Vettel led the way again, with Mark Webber second and Lewis Hamilton third in FP3 at the US Grand Prix. 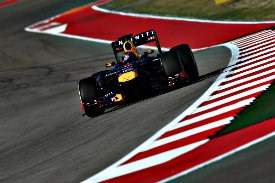 That kept him in front until everyone switched to medium tyres and qualifying simulations for the final few minutes.

Hulkenberg found the most impressive gain on the softer Pirellis, going top with a 1m37.356s and then improving his pace to a 1m37.272s after a cool-down lap.

He resisted one challenge when Webber hit traffic on his first medium-tyre run.

But Vettel had no such dramas and a 1m36.733s lap put him comfortably on top.
Webber then got between the two Germans to take second with his final lap, which was 0.203 seconds off Vettel's pace.

Romain Grosjean turned the tables on new Lotus team-mate Heikki Kovalainen after the Finn's strong start on Friday, taking fifth to the newcomer's 13th. The pair were half a second apart.
McLaren had an encouraging session, as Jenson Button and Sergio Perez took sixth and eighth, split by Mercedes driver Nico Rosberg.

Williams also had reason to smile, with Valtteri Bottas beating Adrian Sutil to ninth.
Conversely Ferrari had a troubled morning, lacking pace on both tyre compounds. The best Fernando Alonso could manage was 11th place.