TVS Asia One-Make Championship announced: All you need to know

Starting this year, top performers from the Indian TVS One-Make Championship will get a chance to race in the international edition. 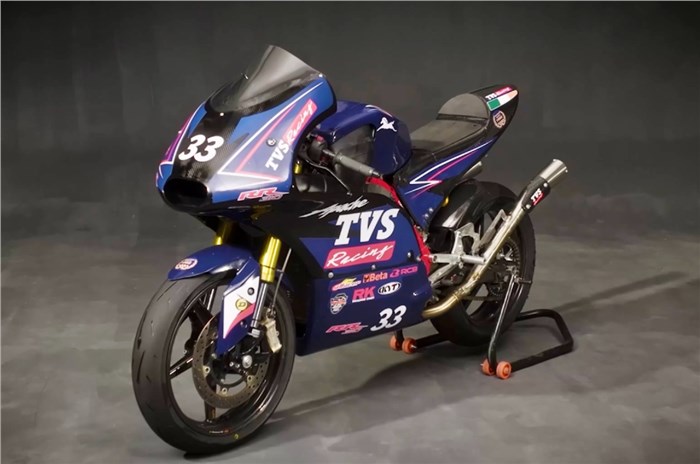 The race-spec TVS Apache RR 310 is 32% lighter than its street-legal counterpart.

TVS is launching its One Make Championship on a global platform, with an Asia edition that will run alongside the FIM Asia Road Racing Championship (ARRC). The TVS Asia One-Make Championship will feature the race-spec Apache RR 310, and also introduces a new development ladder giving Indian riders the chance to make the step up to international two-wheeler racing.

A total of 16 riders from across Asia will participate in the 2022 edition, after a rigorous selection process. This round will be held on April 27 at Malaysia’s Sepang International Circuit.

Four races will be held for the inaugural season, and they’ll run alongside the ARRC calendar. With this, TVS becomes the first Indian two-wheeler manufacturer to host a one-make series on a global platform.

TVS also runs its one-make RR 310 championship in India, as part of the National Motorcycle Racing Championship. And starting from the 2022 season onwards, top performers in the domestic championship will get the chance to race in the Asia One-Make Championship.

Commenting on the new championship, Vimal Sumbly, head – premium business, TVS Motor Company, said, “We take this as an opportunity to take our learnings from the Indian tracks and demonstrate our capabilities internationally. We also look forward to having international racers atop our TVS Asia One-Make Apache RR 310 motorcycles competing in the future championships.”

Stephan P Carapiet, FIM Asia president said, “The One-Make Championship collaboration is an important mark in the motorsport championships as it forms yet another platform for the development of future motorsport stars and an opportunity to race the TVS One-Make machines. TVS will now be able to showcase the capacities, qualities and reliabilities of the machine in the racing field, and through the technical specifications and data obtained from the races, they will also be able to make forward approaches in developing enhanced features that would better serve the needs of their domestic use."

The race-spec Apache RR 310 for the Asia championship is claimed to deliver 38 percent more power than the street legal RR 310. This is thanks to a race-tuned 312cc DOHC four valve engine, titanium valves and forged piston. There are also some major modifications made to the cooling system to enable riders to set consistently quick lap times.

Weight saving is key for any race machine and TVS claims it has shaved off 32 percent of the RR 310’s weight on the race-spec version. This is mainly due to the use of several carbon-fibre components. The carbon-fibre tail also acts as a structural subframe that further helps reduce weight.

Other additions include a Ram air box (a system that sends the intake air at the highest pressure possible and helps in better mass air flow and volumetric efficiency), carbon wheels with Dunlop racing tyres, customised Ohlins suspension, specially designed twin exhaust system, and an aRacer ECU (electronic control unit) with closed loop control, quick-shift, launch control and traction control. The damping and spring forces for the bike have been determined after taking inputs from TVS’ top riders.