The San Marino MotoGP winners paid tribute to Shoya Tomizawa after his death in the Moto2 race. 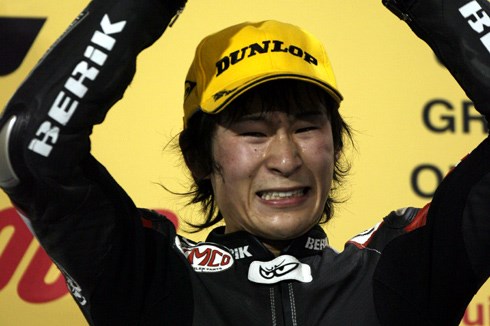 Japanese rider Shoya Tomizawa has died as a result of injuries sustained in the Moto2 race at Misano.

The 19-year-old was running fourth when he crashed in front of Alex de Angelis and Scott Redding, and was hit at speed by both riders. He was taken to hospital in Riccione where he was pronounced dead at 14.20 local time.

"On Sunday 5th September during the Moto2 race at the Misano World Circuit, rider Shoya Tomizawa aged 19 suffered a serious crash and subsequent cranial, thoracic and abdominal trauma," said a statement from the organisers.

Given the seriousness of his condition - especially for the thoracic and abdominal trauma - Tomizawa was immediately treated at the Misano World Circuit medical centre and put under artificial respiration. Despite various attempts to resuscitate him, Shoya sadly succumbed to his injuries at 14.20.

Tomizawa had been one of the sensations of the inaugural Moto2 season. He had been a frontrunner in Japanese 125cc and 250cc racing, but only had a handful of wildcard appearances and a season in the 250cc midfield under his belt on the world stage prior to 2010.

He instantly took to Moto2 though, charging to a historic victory for Technomag-CIP in the series' first ever race in Qatar.

Tomizawa proved that result was no one-off by staying with the frontrunners all season, taking pole positions at Jerez and Brno. He was seventh in the championship heading to Misano this weekend.

Of the other riders involved in the fatal accident, de Angelis walked away uninjured, while Redding is receiving treatment at the circuit but is reported to be awake and alert.