Massa crashed out at Sainte Devote on lap 29, smashing into the barriers on the left-hand side of the track. 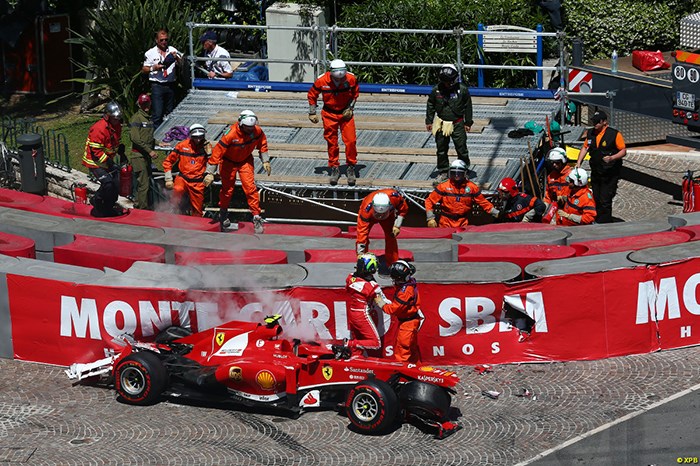 Ferrari has revealed that Felipe Massa's crash in the Monaco Grand Prix was caused by suspension failure.

Massa crashed out at Sainte Devote on lap 29, smashing into the barriers on the left-hand side of the track and then spinning further down the road before a second impact.

The Brazilian was taken to hospital for precautionary checks on his neck, but was released later than evening and returned home.

Although the accident appeared identical to his one in free practice on Saturday, which was caused by driver error, Ferrari technical chief Pat Fry confirmed after the race that the second shunt was caused by an unspecified mechanical problem.

Following detailed investigations by the team, a statement issued by Ferrari said: "The findings validated the first impressions of the engineers, confirming that the accident was caused by an element of the front left suspension breaking.

"With all the required inspections completed to analyse what happened at the Monegasque circuit, the car assembly department can now start work in preparing the car for the Canadian Grand Prix."

Ferrari also said that Massa had been given the all-clear to race in Montreal, and will be allowed a few days' rest in Monaco this week to help recover.

Team principal Stefano Domenicali said: "The best news to come out of the Monaco weekend is that Felipe is fine.

"Two big accidents, just over twenty four hours apart and all he has to show for it is a bit of muscle pain. Fortunately there were no other injuries."