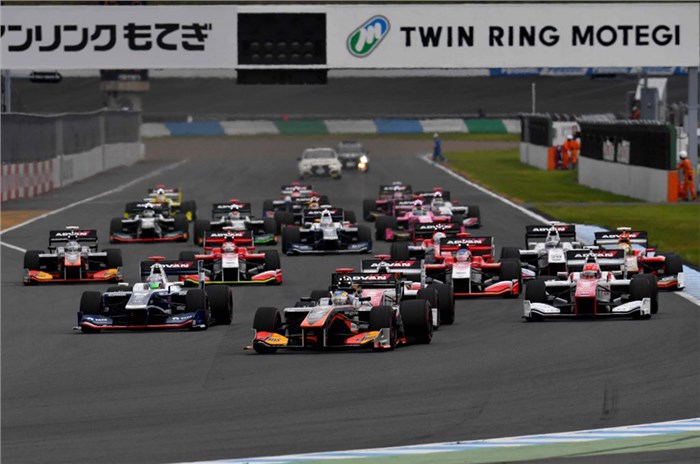 Round 5 of the Super Formula Championship was held at the Motegi circuit, and saw Hiroaki Ishiura win the race from pole position.

The start saw Ishiura get away cleanly from pole, but halfway through the first lap, he was passed by Honda junior driver Nobuharu Matsushita. Meanwhile, Cassidy had qualified fifth, and was the first of the frontrunners to dive into the pits on lap 11.

Matsushita held on to the race lead until he came in for his pit stop on lap 27, while Ishiura stayed out for another 13 laps before coming in for fresh rubber. However, when Matsushita re-joined the race, he found himself behind Kazuya Oshima and Yuhi Sekiguchi, both of whom were due to make another stop. The Japanese driver was unable to pass either of them, and lost a significant amount of time as a result.

Matsushita's misfortune meant that Ishiura managed to hold his lead even after his pit stop, and went on to take the chequered flag in first place. Ryo Hirakawa only managed to qualify in ninth place, but perfectly implemented a two-stop strategy that allowed him to finish in second place. Nick Cassidy, having switched to soft tyres early on, used the pace advantage to earn himself the final podium spot. In doing so, he also took over the lead of the championship, with his 27 points giving him a slim advantage over Yamamoto and Ishiura who have 24 points each.

Indian driver Narain Karthikeyan put in a strong qualifying performance to earn himself fourth place on the grid, but unfortunately slipped down the order as the race went on, and eventually finish 11th, narrowly missing out on points.

"Overall we had excellent pace in qualifying. I was very close to the top Honda runners, only 0.1sec off. So fourth on the grid was good but then in the race, strategies went against us, or let me say it was the wrong call to pit that early on soft rubber. We struggled on medium rubber and lost positions on track. So it is very disappointing to come out empty handed after a good qualifying run,” Karthikeyan said about the weekend.

The next round of the championship takes place at the Okayama International Circuit from September 7-9, 2018. Karthikeyan will be looking for redemption, while Cassidy will fight to hold onto his newly earned championship lead.