Karthikeyan betters qualifying result; Yamamoto’s championship lead cut down to just one point as he struggles to eighth. 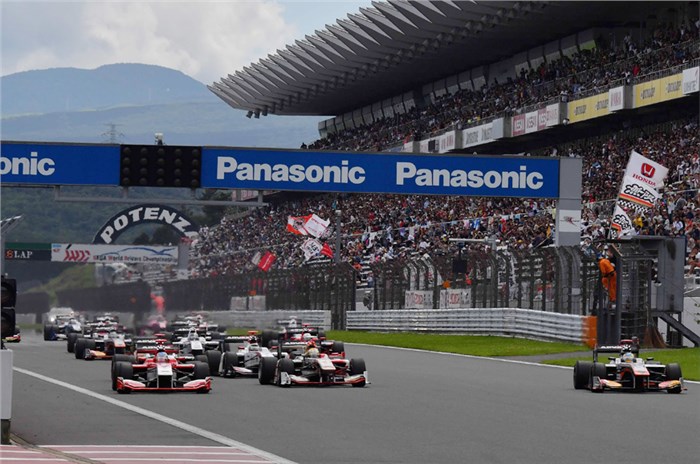 Nick Cassidy took his first win in the Super Formula series at the Fuji Speedway, as championship leader Naoki Yamamoto could only manage eighth place. Toyota-powered cars made a clean sweep of the podium, with Ishiura and Kunimoto finishing second and third, respectively. Former Indian Formula One driver, Narain Karthikeyan, made up two places from his qualifying position to finish 16th, close behind his teammate Takuya Izawa.

It was a tough Saturday for Karthikeyan – Q1 started on a dry track, with rain beginning to fall in certain sectors of the track. All drivers ventured out onto the track on medium slicks, and with just under six minutes remaining on the clock, Karthikeyan spun out in a damp area of the track. A previous lap time of 1:25.307 was good enough for 18th on the grid.

Q3 was run entirely in the wet, with Nick Cassidy taking pole position, joined on the front row by Yamamoto.

Cassidy made a clean start and got the holeshot into turn one, followed by Ishiura. The two drivers remained close and rapidly pulled away from third-placed Sekiguchi. The top six from qualifying, along with Kazuya Oshima and Dan Ticktum from further down the grid, started on soft tyres and had a significant pace advantage.

So remarkable was the advantage of the soft tyres that all the drivers starting on mediums came in to switch to softs as soon as the window was open. Sekiguchi was the first driver on soft tyres to pit, and was nearly 20sec behind the leading duo when he came in at the end of lap 24. Yamamoto inherited third place, and came in for his pit-stop three laps later. He rejoined in eighth place behind Kunimoto and Hirakawa, who had started on mediums and switched to softs. As a result of being on the inferior tyre, he was unable to make up any places.

Cassidy came in for his pit-stop at the end of lap 34, while Ishiura elected to carry on till lap 40. This would prove costly for the Japanese driver, since Cassidy was able to match his pace on fresh mediums. Further to his detriment, he had a slow pit-stop due to jack issues, causing him to rejoin the race more than three seconds behind Cassidy.

The New Zealander held on to his lead to take his maiden win, while Ishiura consolidated second place, 28sec ahead of Kunimoto. Karthikeyan started on medium tyres before switching to softs and brought the TCS Nakajima Racing Honda home in 16th place. His teammate, Iwaza, had a tougher outing, dropping from his grid slot of 11th to finish 15th – they were the sixth- and seventh-placed Honda-powered cars, respectively.

Cassidy’s win coupled with just a single point for Yamamoto means that the Japanese driver’s championship lead now stands at just one point. Karthikeyan is 10th in the championship, equal on points with his teammate. Both drivers have four points as a result of one fifth-place finish each.

The next round of the series takes place at the Twin Ring Motegi racetrack from August 17-19. Karthikeyan will be looking to make amends since he suffered a DNF at the track last year, while Cassidy will be aiming to take over the championship lead from Yamamoto.