The Australian rider led a Honda 1-2 after he narrowly edged out teammate Dani Pedrosa. 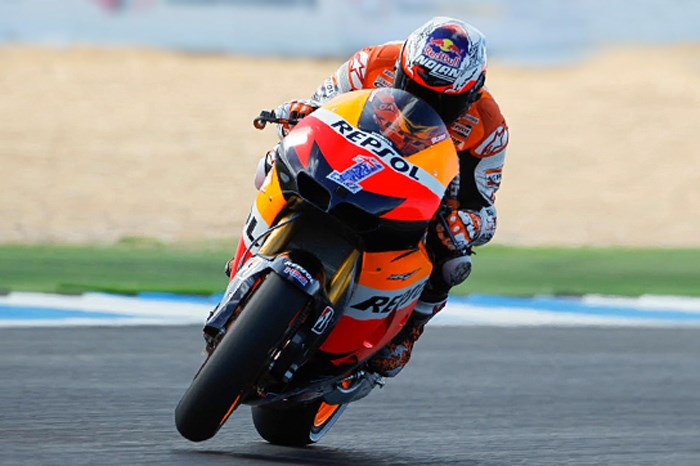 Casey Stoner captured his first pole position of his 2012 MotoGP title defence as a late red flag produced a frantic finish to qualifying at Estoril.

Five riders were in contention in what became a thrilling pole battle, fought out between the works Hondas and Yamahas and Tech 3 Yamaha's Cal Crutchlow, who played a starring role.

For a long while it had seemed that Jorge Lorenzo's early benchmark might just be enough for pole, the Spaniard surviving repeated attempts from the other quartet to best his time.

With 12 minutes to run the complexion of the session changed as Randy de Puniet lost the front of his Aspar Aprilia at Turn 4 and slid into Colin Edwards, who fell heavily. Qualifying was red-flagged as medical crews attended to both riders.

After a short break the session was restarted and Stoner made an emphatic start, claiming pole position on his very first flyer.

Still there a surprise in store as Crutchlow guided his satellite Yamaha to the top with a 1m37.289s.

Stoner had two laps to respond however: on the first he was under for much of the lap but fell away, while on the second he did enough to pip Crutchlow by just 0.101 seconds.

Pedrosa too was out and on his final tour managed to jump into second behind Honda team-mate Stoner, with Crutchlow therefore third. It is the second time in three races he has started on the front row.

Lorenzo was unable to improve in the final minutes and will therefore line up fourth for the Portuguese Grand Prix, ahead of Yamaha team-mate Spies.

The Texan was plagued by bad luck, hitting traffic on at least two occasions when he was inside the pole time. He eventually had to settle for fifth.

Alvaro Bautista claimed the final spot on the second row for Gresini Honda, less than three hundredths of a second ahead of Andrea Dovisioso's Tech 3 Yamaha.

Hector Barbera finished as the fastest Ducati in eighth for Pramac, a similarly tiny margin ahead of Valentino Rossi on the works machine.

Espargaro's team-mate de Puniet did enough to qualify 14th despite his accident, while Edwards - whose participation in the race is in doubt after he landed heavily on his collarbone - was 18th fastest.