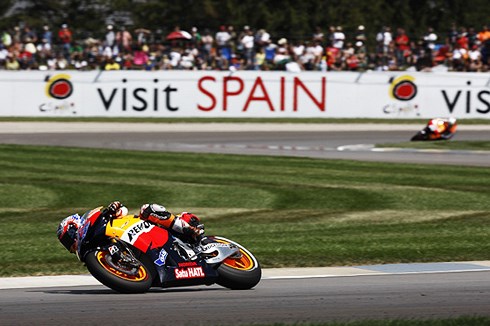 Casey Stoner made it three MotoGP wins in a row as he headed a Honda one-two at the Indianapolis Grand Prix and further increased his stranglehold on the world championship lead.

The Australian was beaten off the line by his team-mate Dani Pedrosa and dropped behind Lorenzo after running wide at Turn 2 on the opening lap.

But after using the grunt of his RCV212 and a tow to pass Lorenzo's Yamaha for second spot on lap three, he pulled off an identical move on Pedrosa to hit the front before the one third distance mark and pulled away to a comfortable 4.828-second win. It was Stoner's seventh win of the year and the 30th of his career.

Front row starter Ben Spies endured a terrible opening lap after starting badly and then being shoved out wide onto the kerbs at Turn 3, causing him to drop to ninth.

The Yamaha rider quickly passed Colin Edwards and Alvaro Bautista and then took advantage when Nicky Hayden - the only man not to use the hardest compound front Bridgestone available - slid wide at Turn 1 to move up to sixth.

He then was merciless in scything past Andrea Dovizioso's Honda and Marco Simoncelli's Gresini Honda - which had been as high as third during the early stages - to move up to fourth.

Next on his radar was his team-mate Lorenzo, whom he nailed under braking at Turn 1 on lap 17 to secure the final podium spot.

In finishing fourth, Lorenzo saw his deficit to Stoner increase from 28 points to 44 while Dovizioso came home fifth with Bautista an excellent sixth for Suzuki.

Edwards came home seventh on his Tech 3 Yamaha, ahead of Randy de Puniet's Pramac Ducati. The Frenchman passed Hector Barbera's Aspar Ducati on the final lap to secure the position.

Barbera, who had also fallen behind Hiroshi Aoyama, then crashed at the last corner of the race as he tried to wrest ninth spot from the Japanese Gresini rider.

His crash allowed Valentino Rossi to complete the top 10 after a disastrous race for the Italian. Rossi was suffering from a gearbox glitch and fell to the back of the field early on after running off the track and having to stop before rejoining.

On a terrible day for Ducati machinery, Rossi's team-mate Hayden was a lapped 14th after running into tyre problems. Pramac rider Loris Capiross and AB Cardion's Karel Abraham failed to make the finish.

Simoncelli was another to experience rubber issues, the Italian slipping back to 12th by the chequered flag.