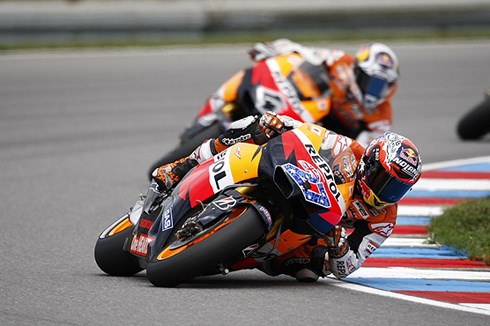 The Australian inherited the lead when his Honda team-mate Dani Pedrosa crashed out on lap three, the Spaniard losing the front end of his RCV212 and sliding off into the Turn 4 gravel.

Pedrosa had only hit the front two corners previously, the polesitter overtaking Lorenzo as the world champion had a major slide exiting Turn 1 and lost momentum while exiting the corner.

His exit left Stoner - who also passed Lorenzo after the Yamaha rider's moment - in front, and the 2007 world champion was able to pull out a comfortable 6.5-second margin and take his sixth win of the year.

Lorenzo - the only one of the front-runners to choose the softer of the two front tyres available from Bridgestone – became embroiled in a hectic battle for second with Stoner's team-mate Andrea Dovizioso and Gresini Honda rider Marco Simoncelli.

It didn't last long as after putting up a valiant fight against the pair, he was dispatched by both on lap 11 and quickly fell away from them as Dovizioso came home second and Simoncelli took his maiden podium finish in grand prix racing's premier class.

Fortunately for Lorenzo, the man behind was his team-mate Ben Spies, who dutifully held station for the remainder of the race as the pair finished fourth and fifth.

Valentino Rossi made a poor start from sixth spot, but passed his Ducati team-mate Nicky Hayden to resume the position on lap two. He spent two thirds of the race fending off the determined efforts of Alvaro Bautista, but was given some breathing space when the Suzuki rider crashed out at Turn 14 after a superb ride.

Britain's Cal Crutchlow crashed out early on after losing the front end of his Tech 3 Yamaha while exiting Turn 1.

Karel Abraham was another who failed to make the finish, the Czech rider falling early in his home grand prix and then retiring as plumes of blue smoke appeared from his AB Cardion Ducati at half-distance.