The 7th edition of the Maruti Suzuki Desert Storm 2009, came alive as 184 participants in 75 Cars 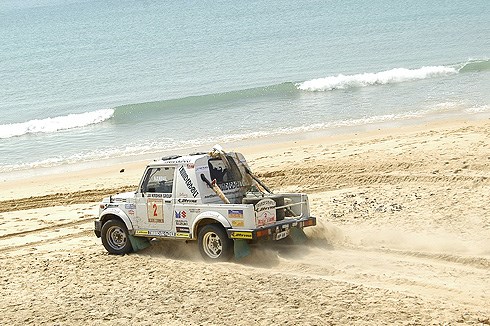 The 7th edition of the Maruti Suzuki Desert Storm 2009, came alive as 184 participants in 75 Cars, 5 Motorcycles and 2 ATVs took the ceremonial flag at New Delhi. The actual competition started from Shapura, on the Delhi-Jaipur Highway.

This 2,600km, 12-stage rally requires mental strength and a lot of planning for service back up, with the best-prepared team generally taking victory. This was the first time the Desert Storm featured the Moto Quad category with ATVs.

Five-time Raid de Himalaya winner Suresh Rana was contented at last, having taken his maiden Desert victory. “I am thrilled beyond doubt,” said the Shimla man, who had stiff competition from Sunny Sidhu through the Storm.

Mohan Lal Sharma, the winner of the Motorcycles category however declared that he wished for more competition in the next edition of this gruelling event. And the organisers do have major plans for the 8th Desert Storm in 2010. “Next year shall see us pushing the envelope even further with a major leap in technology by which we shall be able to locate each participant, real time, 24/7. We shall also give them an SOS emergency device which will transmit competitors’ location so that we are able to respond more efficiently,” says Raj Kapoor of Northern Motorsports.

It is interesting to note the Desert Storm started with a paltry 30 competitors in 2003, and has grown to a 180-plus in the seventh year.