Narain has a slow but steady start at pre-season Valencia test. 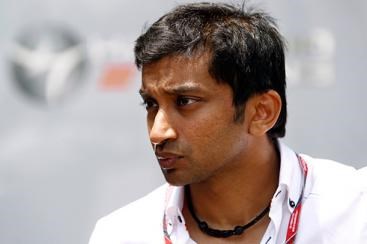 Narain Karthikeyan has had a slow start to his Formula 1 comeback when he took to the track on the first day of pre-season testing on February 1, in Valencia.

Driving the 2010 HRT F110, Narain used this opportunity to get used to the F1 car as well as the new Pirelli tyres. It was time for him to collect data on how the new tyres perform, and he did a good job at the controls of the HRT, and took advantage of the day to get used to the new medium and soft compounds.

Narain completed a total of 45 laps, clocking a best time of 1.18.020, which was 4secs off the leader. However, Narain and the team hopes to reduce this gap when the new HRT F111 hits the track at the final test of the pre-season in Bahrain, ahead of the start of the 2011 season.

Karthikeyan believes his A1GP and Superleague outings have kept him sufficiently in touch with a single-seater driving style to swiftly settle back into F1. After driving for 45laps, Narain has received positive feedback from the car and his team. He is finding the HRT more to his liking as compared to the Jordan he raced in 2005. He is feeling good and confident.

Physically too Narain is content with the way his body is coping with the g-forces experienced while driving the F110. His neck muscles have shown no signs of stress and Narain is confident he can improve with time.

Speaking after the practice session, Narain Karthikeyan said, “It did not seem to be easy to drive the new car after all this time but finally it was not that difficult. I got into it quite quickly and yes, we could have done some more laps but we have some minor problems. But all and all I am very happy to be back, and I think the body and the mind did pretty well, so I am looking forward for the next two days.”

Toni Cuquerella, Chief Race and test engineer, HRT, said “Narain has done a very good job in his return to F1. He has worked in the car systems and has been familiarising with the new tyres. The collected data will be really helpful to carry over to the new F111”.

So far Narain has made no mistakes and is still building up his speed. He is doing good in adapting himself again to Formula 1 and needs to quickly get used to the high g-forces and to the new Pirelli tyres.