The title fight remains finely poised despite Red Bull and Sebastian Vettel's advantage in the standings, 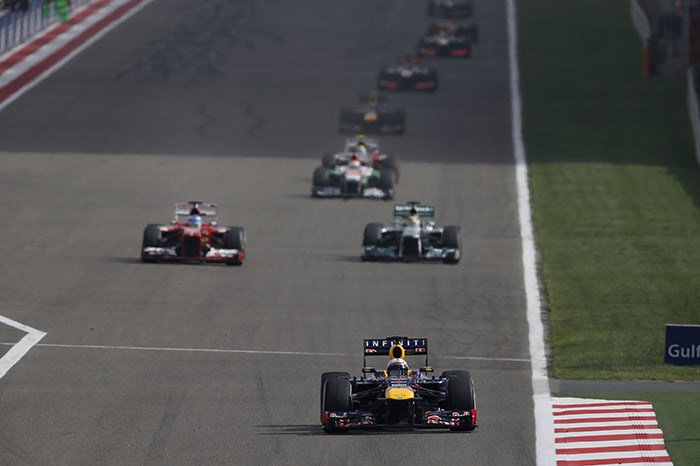 Formula 1 bursts back into action at the Spanish Grand Prix this weekend for the start of what will be a crucial phase of the world championship battle.

Although it is Red Bull that leads the way in the constructors' standings, and Sebastian Vettel holds the advantage in the drivers' rankings, the title fight remains finely poised.

Lotus, Ferrari and Mercedes each have reason to feel optimistic about their potential to challenge Red Bull over the remainder of the campaign after delivering frontrunning performances so far.

But Red Bull's headaches have not just come from the opposition, for it is the difficulties teams has faced mastering the new generation of Pirelli tyres that is at the very top of the reigning champion's 'to do' list.

Christian Horner, Red Bull's team principal, has conceded that it is getting on top of the tyre situation that will be key to his team's hopes of a fourth consecutive championship double.

"Our biggest challenge is going to be developing and understanding these tyres," he told AUTOSPORT. "We have a good car, a very good car, but at the moment, the tyres are a predominant factor in F1.

"It is a different type of racing because it is a matter of achieving longevity with the tyre and ultimate pace is not the crucial factor.

"So it is adjusting; as we had to adjust going from Bridgestones to Pirellis, from refuelling to no refuelling, blown diffusers to no blown diffusers - and I am entirely confident that we will adapt. But it is going to take time."

Red Bull is not the only team that needs to get a better comprehension of the tyres, for Mercedes needs to gets its rear tyre operating temperature window lower, and Lotus still needs some answers as to why it cannot keep a consistent balance on all the compounds for qualifying.

For Ferrari, the challenge is different, for it appears to have a good balance between its qualifying and its race pace and has few tyre questions.

However, after a season like 2012 where it made the most of every opportunity it had, it has squandered results this season thanks to the mistake of keeping Fernando Alonso out on track in Malaysia with a damaged front wing, and the DRS issue in Bahrain.

For all teams though, Barcelona is not just going to be another chapter in the quest to unlock the secret to 2012's tyres, for it will provide a key clue in how the development race unfolds from here.

Every team will have spent the last few weeks putting the finishing touches to a host of aerodynamic developments that they hope will bring them a few tenths in performance.

The key to whether or not that helps their form on track, though, is if a team has found a bigger improvement than its main rivals.

Some teams like McLaren, which has endured a troubled start to the campaign, will have more room for improvement, but at the front end where things are much closer, the scope for a radical step forward is greatly diminished.

However, with things looking so tight – and there remaining a good swing between single-lap form and race pace – there is every chance that even one tenth of a second of performance could prove crucial in what looks like a very tight battle for glory.