The Mercedes driver ensured it was a British 1-2 at the top of the timing sheets as he finished 0.868s ahead of McLaren's Jenson Button. 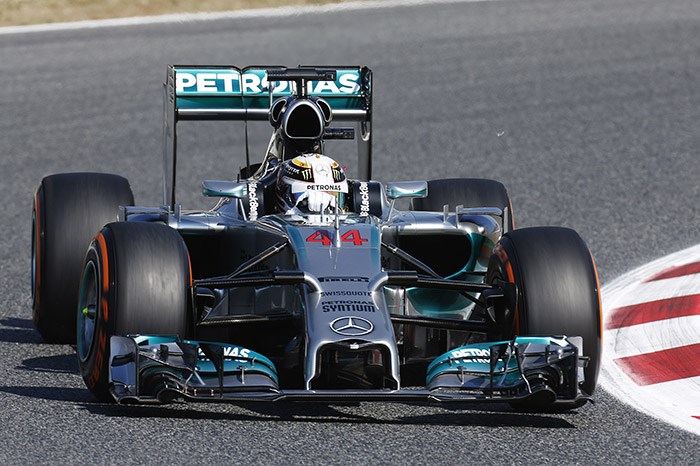 Lewis Hamilton set the pace for the opening Formula 1 practice session of the Spanish Grand Prix weekend to continue his stronghold on this year's championship.

The Mercedes driver ensured it was a British 1-2 at the top of the timing sheets as he finished 0.868s ahead of McLaren's Jenson Button.

Button held the fastest time for the majority of the Friday morning session recording his best time on the hour mark.

The McLaren driver was stationed at the top of the timesheets until his compatriot Hamilton set the fastest time five minutes from the end of the session.

There were problems for Sebastian Vettel, who sat out nearly the entire practice period after an electrical issue halted his running and he pulled to the side of the track at Turn 5, just 25 minutes into FP1.

The German had only completed four laps when the problem struck his car and he ended up with the 20th fastest time.

Nico Rosberg could only manage the fifth fastest time after he suffered a lack of running due to a problem with his Mercedes power unit.

Behind Button, Daniel Ricciardo was third fastest in his Red Bull ahead of Fernando Alonso, who was visibly hustling his Ferrari around the Spanish GP circuit.

His team-mate Kimi Raikkonen was sixth ahead of the second McLaren of Kevin Magnussen.

There was drama for Giedo van der Garde when he suffered a partial brake failure at Turn 1 and ran through the gravel at high speed, just missing the barriers on the outside of the corner.

Sauber's reserve driver was in the car in place of Esteban Gutierrez for FP1. He was able to continue to the pits unharmed.

The opening practice session of the weekend was the first chance for all the teams to try test the performance of their upgrades.

There was a bizarre moment for Sergio Perez when his left rear view mirror broke and came into his cockpit, forcing the Force India driver into the pits.