The first round of the2017 F3 calendar was held at the famed 5.9km Silverstone Formula 1 circuit in the UK. 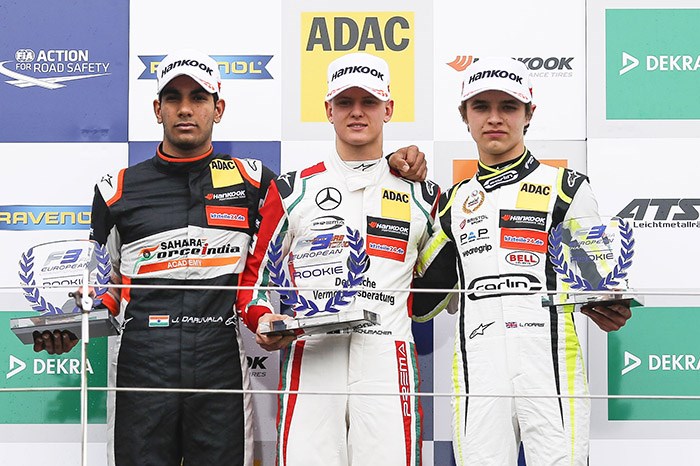 Sahara Force India Academy racer, Jehan Daruvala had an impressive debut in the highly competitive FIA Formula 3 European Championship. The Mumbai based teenager stepped up to F3, after two commendable seasons in Formula Renault 2.0. Jehan’s first F3 weekend saw him on pace with the front runners and earn himself two rookie podiums.

The first round of the2017 F3 calendar was held at the famed 5.9km Silverstone Formula 1 circuit in the UK.  The weekend started with Jehan eleventh in the first practice but improving significantly to finish third in the second session, just 0.28 seconds off the quickest time. Jehan continued his impressive pace to qualify fifth out of nineteen racers in the first qualifying session. He was 0.28 seconds off the local British racer Lando Norris who bagged pole. Qualifying session 2 saw Jehan narrow down the gap to 0.173 seconds off pole, set by Callum Illot. With such a small gap, Jehan qualified 6th which shows the competitiveness of the series.

Race 1 started under the safety car due to rain and Jehan did not have an ideal race. He soon dropped down the order to eighth, before falling even further. Once the conditions improved, Jehan was able to make back some ground and eventually finished in the points with tenth. “Testing here, was under much better conditions. It took me a bit of time to adjust to the damp conditions on slick tyres which lost me a few places. It is good that I was able to recover at the end and finish in the points in my first F3 race” said Jehan after Race 1, which was eventually won by Norris.

The start of Race 2 went terrible for Jehan. Overnight rain meant that the inside of the track was still wet and most racers on that side of the track had a bad start. As they fell down the order, Jehan found himself in 14th  after the start! Jehan was on pace immediately though and he slowly started climbing back, up the order. Ahead of him, race 1 winner Lando Norris also had a bad start and Jehan went on to have an exciting battle with Lando. On the last lap of the race, Jehan got the better of him and overtook Lando for eighth and finished in the same position.  Jehan’s impressive pace saw him overtake more cars than anyone else in race 2 which was won by Swedish racer Joel Eriksson.

In the Rookie classification in Race 2, Jehan was second behind Mick Schumacher while Lando was 3rd .

Race 3 grid was based on the second fastest lap in Qualifying 2. Jehan started well from fifth and managed to hold his position. Soon he overtook Lando to move into fourth. Jake Dennis joined them to make it a three car battle and soon got the better of Lando. Jehan then made a small mistake which allowed Lando to overtake both cars at one time, dropping Jehan to fifth once again. Jehan was then overtaken by Jake, which dropped Jehan to sixth, where he eventually finished. Callum Illot won the race.

In the rookie classification in Race 3, Jehan once again bagged the trophy for coming 2nd behind Lando Norris while Joey Mawson was third.

"There were many positives from my first weekend in Formula 3. Qualifying 5th, 6th and 5th for the 3 races of the weekend and finishing in the points in all 3 races was very satisfying. The experience of battling through the field from 14th to 8th in Race 2 and the top 6 finish in Race 3 was a good result. I must thank everyone at Carlin for the hard work they have put in over the winter to give me a competitive car.”

Jehan came away from the first event 3rd in the Rookie Championship and 8th in the overall table. Jehan’s next race will be at the end of April where the FIA Formula 3 European Championship will race alongside the World Touring Car Championship in Monza.