The Red Bull driver opted to do just one Q3 run as his initial 1m42.841s lap put him 0.6 seconds clear of his rivals. 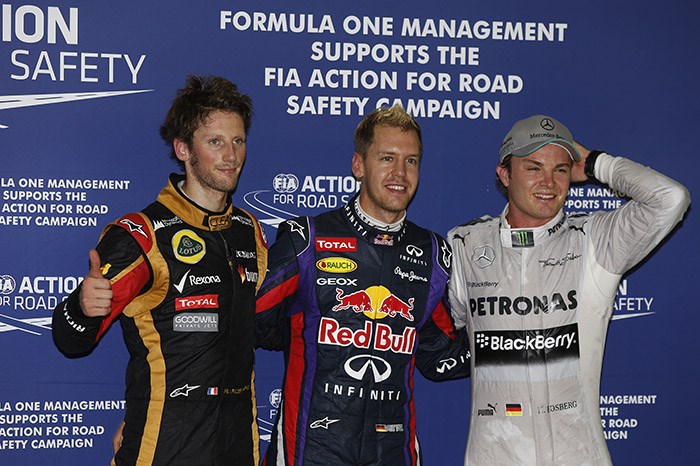 Sebastian Vettel hung on to take his fifth pole of the 2013 Formula 1 season in Singapore Grand Prix qualifying.

The Red Bull driver opted to do just one Q3 run as his initial 1m42.841s lap put him 0.6 seconds clear of his rivals. He had also outpaced the pack by nearly a second in Q2.

Vettel's casual approach to the pole shootout almost proved costly, as first Mark Webber, then Nico Rosberg and Romain Grosjean all hinted at pole pace on their second shots.

In the end, they all fell short. Rosberg's Mercedes came closest, 0.091 seconds down on Vettel, who is separated from team-mate Webber by Grosjean's Lotus.

Lewis Hamilton was only fifth in the second McLaren, while the Ferraris were down in sixth and seventh, with the departing Felipe Massa ahead of team leader Fernando Alonso again.

Massa had earlier only just made it beyond Q1 having encountered traffic at the wrong moment.

It emerged just before qualifying that Kimi Raikkonen was struggling with back pain and that Lotus had been sufficiently concerned to get reserve driver Davide Valsecchi prepared.

The Finn only managed to qualify 13th, lapping 0.7s slower than team-mate Grosjean in Q2. It remains unclear whether his race participation is in jeopardy.

Esteban Gutierrez was among the stars of qualifying as he put aside recent Saturday woes to reach Q3 for the first time, having first hauled himself out of Q1 at the last moment.

His Sauber team-mate Nico Hulkenberg was overshadowed for once and is only 11th on the grid.

Sauber was not the only team to have one driver either side of the Q2/Q3 divide.

Jenson Button sneaked into the top 10 for McLaren by just 0.058s and took eighth, while the under-pressure Sergio Perez was down in 14th.

Jean-Eric Vergne was within 0.091s of joining Toro Rosso team-mate Daniel Ricciardo in Q3 but will start 12th, three places behind the Australian.

Gutierrez and Massa's late jumps in Q1 caught out Paul di Resta, who was already in the pits and pushed back to 17th. Team-mate Adrian Sutil only managed two places better.

Williams's Pastor Malonado was also knocked out in Q1, though team-mate Valtteri Bottas made it to Q2.

Caterham was again quicker than Marussia, Charles Pic coming out in front among the tail-end pack.