Red Bull's world champion left the rest of the field to entertain in his wake as a mid-race safety car shuffled the distant chasing pack. 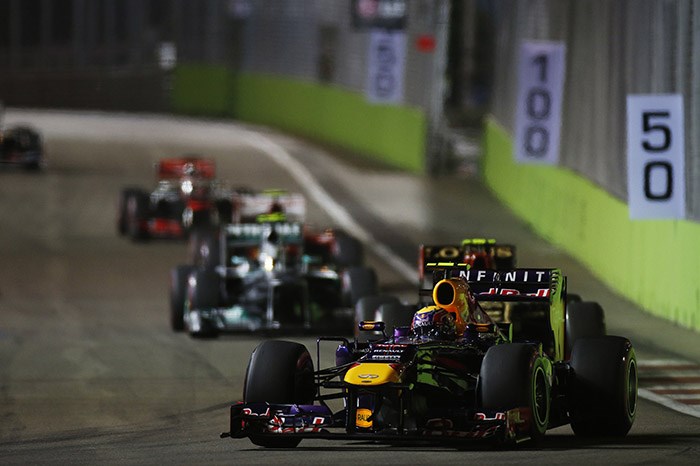 Sebastian Vettel produced his most dominant performance of the 2013 Formula 1 season so far to win the Singapore Grand Prix.

Red Bull's world champion left the rest of the field to entertain in his wake, as differing pit tactics following a mid-race safety car shuffled the distant chasing pack.

In the end it was Fernando Alonso who tigered through yet again to give Ferrari second place, as Kimi Raikkonen shrugged off his back problem to turn 13th on the grid into third position.

Mercedes gained fourth and fifth for Nico Rosberg and Lewis Hamilton when the second Red Bull of Mark Webber ground to a halt on the final lap.

Rosberg did his best to make a race of it at the start as he edged ahead of poleman Vettel and outbraked him into Turn 1.

But the Mercedes ran slightly wide and Vettel slipped back through, with Rosberg's retaliation attempt on the outside of Turn 3 failing to come off.

Vettel was not going to take any more chances and began storming away from Rosberg and the rest, leading by six seconds after as many laps.

Alonso made another amazing start, but it was his late-braking move down the outside into the first corner then gained him most ground, as he surged into third place.

Up front, Vettel was not only able to outpace the pack with ease, but could also make his tyres last longer.

Rosberg's second place became a little more secure when Alonso emerged from his first pitstop behind Paul di Resta's yet-to-stop Force India, which would stay in front for six laps.

That delay would have stymied Alonso's chances of making further progress had Daniel Ricciardo not crashed his Toro Rosso and prompted a long safety car just before half-distance.

Most of the frontrunners, led by Alonso, came in for tyres, while Vettel, Rosberg, Webber and Hamilton stayed out.

As it turned out, most of those who had stopped could make their tyres last the rest of the distance.

While this was no problem for Vettel, who pulled away at such a ferocious rate he could easily pit again and stay ahead, the other three tumbled into the midfield traffic when they had to come in again in the final part of the race.

That elevated Alonso to second, ahead of Jenson Button and Raikkonen.

The Ferrari pulled well clear of the McLaren and Lotus, which engaged in an increasingly spectacular battle as Button's tyres faded.

With seven laps to go, Raikkonen pulled off a sublime move around the outside of Button to deny McLaren a podium and get himself into third from 13th on the grid.

Webber had jumped Rosberg in the final stops. The Australian then led the two Mercedes as they hacked back through the field, overtaking the Saubers and McLarens and setting their sights on the podium.

Alonso and Raikkonen were always likely to be out of reach though, and then Red Bull ordered Webber to back off amid a growing technical problem in the final laps.

He was powerless to prevent the two Mercedes easing past him and his car then came to a stand with an apparent engine failure with half a lap of the race to go.

Felipe Massa had to make three pitstops and finished sixth, ahead of a train of tyre-troubled cars in Button, Sergio Perez and Nico Hulkenberg, chased by three-stopper Adrian Sutil.

Di Resta crashed out late on, while qualifying star Esteban Gutierrez fell back to 12th behind Pastor Maldonado as his tyres faded.