The 2014 F1 title contender was only fourth fastest in the early stages of the session, when the field ran on the slower soft-compound Pirelli tyres. 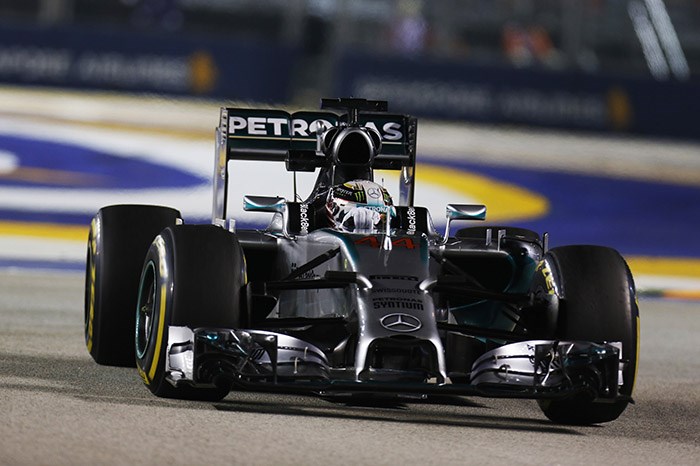 Lewis Hamilton ended the opening day of practice for the Formula 1 Singapore Grand Prix on top of the timesheets in his Mercedes.

The 2014 F1 title contender was only fourth fastest in the early stages of the session, when the field ran on the slower soft-compound Pirelli tyres.

But after leaving his qualifying simulation run on super-softs later than most, Hamilton was able to take to the track when it reopened after a mid-session red flag.

This was caused by Pastor Maldonado, who lost the rear of his Lotus exiting the Turn 10 left-hander and, in correcting, ran out of road and slid heavily into the exit barrier.

Hamilton, who complained about a vibration in his brakes at the start of the run, then set a lap good enough to relegate Red Bull driver Daniel Ricciardo to second place by three tenths of a second.

While the vast majority of drivers had completed their qualifying simulations before the red flag, of the frontrunners only Fernando Alonso and Nico Rosberg had yet to do so.

Alonso got to within 0.133s of Hamilton on his performance run, ending the session second ahead of Ricciardo.

But Rosberg, who had already started his qualifying simulation when the red flag came out, then went straight into a long-run after the restart.

This meant that his fastest lap on the soft Pirellis stood as his best, the significant performance difference between the two compounds leaving him down in 13th, just over a second-and-a-half off Hamilton.

Kimi Raikkonen completed a promising day for Ferrari in fourth, four tenths slower than his team-mate.

Remarkably, Sebastian Vettel ended the session fifth having only taken to the track with seven minutes remaining.

He had suffered an engine problem at the end of the day's first session, with Red Bull doing a superb job to get his car ready for a run on super-softs in the closing minutes.

This relegated McLaren pairing Kevin Magnussen and Jenson Button to sixth and seventh.

The Force Indias of Sergio Perez and Nico Hulkenberg, who had held first and second on the timesheets after being among the earliest to bolt on super-softs, ended up eighth and ninth ahead of the Toro Rossos of Daniil Kvyat and Jean-Eric Vergne.

Romain Grosjean coaxed a good lap out of a Lotus that looked very difficult to drive to end up 12th, ahead of Rosberg, with Maldonado also setting a good pace on his qualifying simulation prior to his shunt.

With the Saubers of Adrian Sutil and Esteban Gutierrez 15th and 16th, it was a difficult day for the Williams team.

Although it had expected to struggle here, Felipe Massa and Valtteri Bottas ended up right down in 17th and 18th.

The Marussia drivers won the battle at the back, with Jules Bianchi and Max Chilton, the latter of which suffered with a turbo problem late on, outpacing Kamui Kobayashi and Marcus Ericsson.