Red Bull locked out the second row, with Daniel Ricciardo third ahead of Sebastian Vettel, just half-a-tenth separating the two. 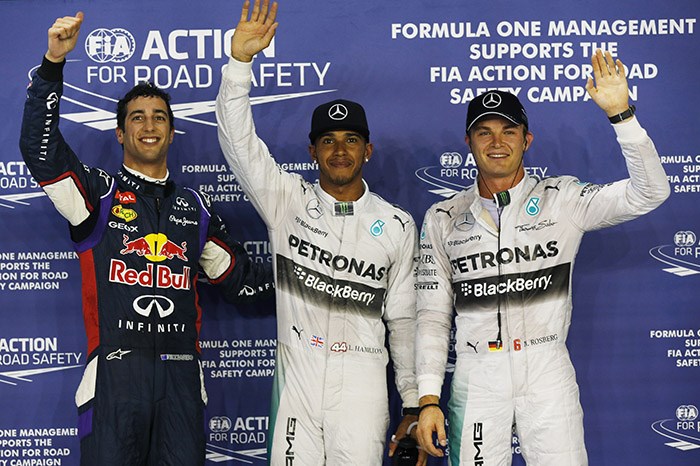 Hamilton was only sixth fastest on his first run in the Q3 top 10 shootout but despite a lock-up at Turn 1 on his final lap, a particularly strong run through the middle part of the lap allowed him to pip Rosberg.

Red Bull locked out the second row, with Daniel Ricciardo third ahead of Sebastian Vettel, just half-a-tenth separating the two.

Fernando Alonso was fifth fastest, only a tenth behind the lead Red Bull, although Ferrari team-mate Kimi Raikkonen was not able to do better than seventh after suffering a car problem on his second run.

Splitting the Ferraris was Felipe Massa, the Williams driver putting in an impressive lap to go fastest in Q3 on first-run times, but only able to make a tiny improvement on his second lap.

Valtteri Bottas was eighth in the second Williams, the Finn unable to improve on his second run.

Kevin Magnussen was ninth, only 0.569s off Hamilton's pole position time, while Daniil Kvyat was slowest in Q3 after having only one set on super-soft rubber available for the final session.

Jenson Button and Jean-Eric Vergne were in the top 10 in Q2 on their first runs, but with both Williams drivers setting slow times after choosing to run used super-softs for their first run, were always in danger of missing the cut.

They were bumped down to 11th and 12th when Massa and Bottas improved on fresh rubber.

Button was able to improve on his second run, but a lock-up at the hairpin cost him time and he missed the cut by 23 thousandths of a second, ending up 11th.

Vergne was unable to improve on his second run, complaining about front-end grip and suffering a costly lock-up, meaning he qualified 11th.

Force India pairing Nico Hulkenberg and Sergio Perez also both failed to improve on their second runs, ending up 13th and 15th respectively.

They were split by Esteban Gutierrez, showing a strong turn of pace in the upgraded Sauber.

Romain Grosjean was slowest of those who made it to Q2, complaining vociferously over the radio about an engine problem that cost him time.

Adrian Sutil came close to escaping Q1, but failed to relegate Perez into the dropzone with his final lap in the first segment of qualifying and ended up 17th.

Pastor Maldonado blamed a power unit problem on his final run for failing to reach Q2.

He was unable to fully recharge the battery, meaning he was lacking full power on his final lap, ending up 18th, behind Jules Bianchi.

The Frenchman put in a superb lap on his final effort to jump ahead of team-mate Max Chilton, who ended up 21st, with Caterham driver Kamui Kobayashi doing a good job to separate the pair.

Marcus Ericsson joined the session late after the Caterham team had to work flat out to solve an electrical problem that had struck in free practice, ending up last.