Widely known throughout motor racing as 'the Prof', Watkins served for more than two decades as head of F1's on-track medical team. 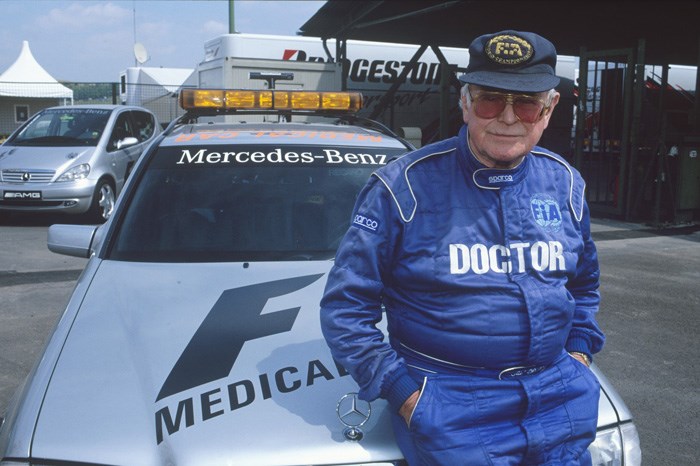 Sid Watkins, Formula 1's former FIA Medical Delegate, who was key in making the sport as safe as it is today, has passed away. He was 84.

Widely known throughout motor racing as 'the Prof', Watkins served for more than two decades as head of F1's on-track medical team - improving safety standards and saving the lives of many drivers.

Born and educated in Liverpool, Watkins had worked as a doctor at Brands Hatch and Watkins Glen before being offered the medical delegate role for F1 after meeting Bernie Ecclestone in 1978.

He campaigned hard to improve safety standards and medical facilities at tracks through a spell where the sport lost many high-profile drivers - including Ronnie Peterson and Gilles Villeneuve.

His efforts to ensure that medical centres were up to scratch, medical cars were used correctly and a medical helicopter was mandatory helped improve the sport dramatically.

That work helped save the lives of a number of drivers through Watkins' 26-year spell in F1, including Didier Pironi, Nelson Piquet, Gerhard Berger, Rubens Barrichello, Mika Hakkinen, Martin Donnelly, and Karl Wendlinger.

But his saddest weekend came at the 1994 San Marino Grand Prix, where Watkins witnessed first-hand as both Roland Ratzenberger and Ayrton Senna - a personal friend - were killed.

After that Imola weekend, Watkins was involved in the setting up of the FIA Expert Advisory Safety Committee, which eventually became the FIA Institute for Motor Sport Safety.

Watkins retired from his medical role in F1 in 2005, but continued to push for ever improved standards through his role as the first president of the FIA Institute, before stepping down from that position in 2011 but retaining an honorary role.

He most recently returned to the spotlight in the film 'Senna' where he recounted the Imola 1994 weekend and how he tried to persuade the Brazilian racing driver to retire from the sport after Ratzenberger's crash so the pair of them could 'go fishing'.

Watkins famously wrote in his autobiography about what he told Senna: "What else do you need to do? You have been world champion three times, you are obviously the quickest driver. Give it up and let's go fishing."

Our condolences to the Watkins family.