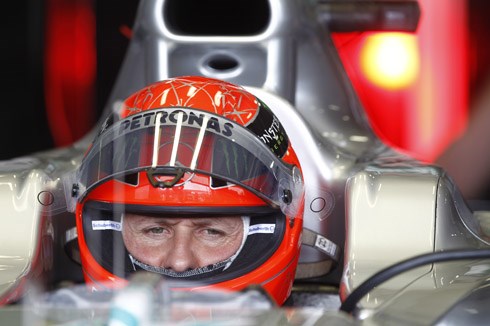 Michael Schumacher insists that there is no doubt he will see out his three-year contract at Mercedes GP, despite recent speculation suggesting he could walk away from the deal early if he was unhappy.

Team principal Ross Brawn said at the European GP that it was Schumacher's decision alone on whether he continued racing in 2012 - with the German understood to have a clause in his contract that would allow him to stop.

Speaking ahead of the British GP, however, Schumacher said there was no question of him activating that clause - and he was fully committed to continuing.

"I always had the option to stop at any time I wanted," he explained. "But I aim for an achievement and a fixed time. I have always said it's a three-year programme and that's what it is."

Schumacher reckoned he was still improving since his comeback – and that he did not yet feel he was at the peak of his ability.

"I feel good first of all, and you always improve," he said when asked for his feelings about his comeback. "In all my first 16 years of F1 I always have felt that I constantly developed, maybe in smaller rates than you do initially. And so I do.

"It actually took a while to get back in to the habit of the whole working arrangement and I guess that's a lot more easy for me now, but I still do understand that I am learning how to work with the team and how to get the car to work for me.

"This is a constant development and I am certainly not yet at 100%, although you could probably say you never can be."

And Schumacher insisted he was not too concerned that his return to F1 has not delivered the level of success that he achieved earlier in his career.

"You always judge your performance possibility with the car that you have in hand," he said. "It was like that in the past and so it is now, and you try to maximise this.

"If you achieve that you can be happy about yourself, if not you can be unhappy. You keep working. You know that only through work and steady development you may arrive back to the top as it happened to me in the past.

"There is no magic to arrive up front. It's all about timing, steady progress, staying motivated and working hard."