Schumacher vaulted his Mercedes to the top spot with a 1m14.301s at the end of the session. 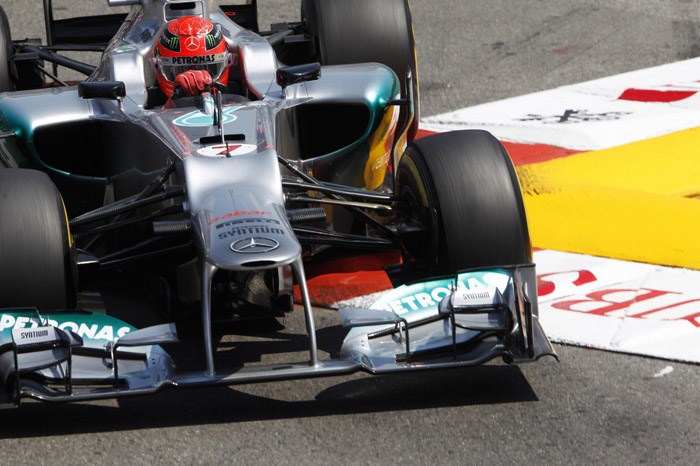 Michael Schumacher was fastest in Monaco Grand Prix qualifying, but Mark Webber will start from pole position due to the German's five-place grid penalty for crashing into Bruno Senna at Catalunya.

Schumacher vaulted his Mercedes from a provisional fifth on the grid after his first Q3 run to the top spot with a 1m14.301s at the end of the session.

But the penalty for his Barcelona incident means he will not be able to claim the first pole position of his Formula 1 comeback, as instead Red Bull driver Webber - who was 0.08 seconds slower - will head the Monte Carlo grid for the second time in his F1 career.

Schumacher's team-mate Nico Rosberg held provisional pole for most of Q3, before slipping to third, which will still be a front row position.

Lewis Hamilton was fourth quickest for McLaren, ahead of Lotus's Romain Grosjean - who had looked like a pole threat until a poor middle sector on his last lap.

Ferrari could not manage the pole challenge it had been tipped for, with Fernando Alonso and Felipe Massa sixth and seventh, ahead of Kimi Raikkonen in the second Lotus.

Spanish GP winner Pastor Maldonado made it to Q3 and was ninth, but his Williams will also be moved down the order due to the 10-place penalty for his incident with Sergio Perez in final practice.

Red Bull's championship leader Sebastian Vettel did not run in Q3 despite making the cut.

For the second grand prix in succession, Jenson Button failed to get beyond Q2. The McLaren driver could not improve on the 1m15.536s lap that had put him back in 13th.

A year on from his dramatic accident at the chicane, Perez was in trouble in Monaco qualifying again as he slid into the Swimming Pool barriers - seemingly due to a mechanical issue - early in Q1. The Mexican tried to drag his damaged Sauber back to the pits but succeeded only in causing a red flag when he shed a wheel and had to park at Rascasse.

Perez's team-mate Kamui Kobayashi also had a brush with the wall, but continued intact and qualified 12th.

Toro Rosso's Jean-Eric Vergne was the other man to crash, losing control under braking for the chicane and clouting the barriers, causing wing and suspension damage. That left him 17th on the grid - but this was just one place behind team-mate Daniel Ricciardo.

Senna again failed to match Williams team-mate Maldonado's pace and was only 14th.

At the back, Heikki Kovalainen came within a tenth of getting his Caterham into Q2 and beat team-mate Vitaly Petrov by nearly a second.

HRT's Pedro de la Rosa was also impressive as he split the Marussias and was only a tenth off Timo Glock.