The seven-time world champion hopes that Mercedes learns from Indian Grand Prix woes, where both team cars finished out of points. 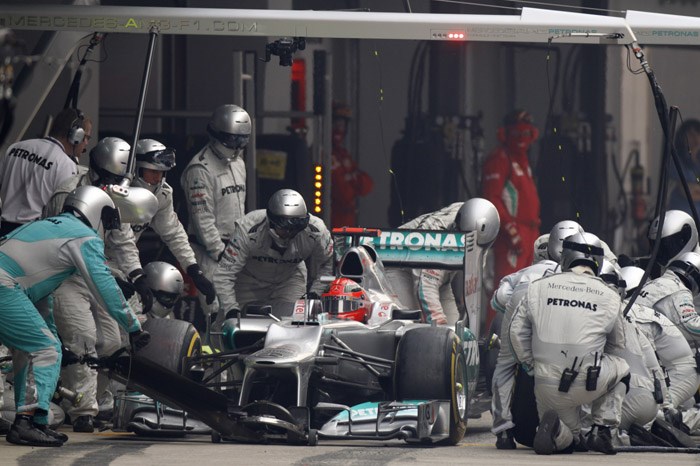 Michael Schumacher hopes that Mercedes learnt something from its dreadful Indian Grand Prix.

The soon-to-retire Formula 1 legend had one of the worst races of his record-shattering career at Buddh last weekend.

Schumacher picked up a puncture from first-lap contact with Jean-Eric Vergne, was later investigated for allegedly impeding Romain Grosjean while being lapped, and was on course for only 18th place when he withdrew with gearbox issues near the finish.

Mercedes' tough weekend was completed by Schumacher's teammate Nico Rosberg finishing outside the points in 11th.

Schumacher said the upcoming Abu Dhabi GP was normally one of his highlights of the season — so he was keen to learn from last weekend's disasters and turn things around at Yas Marina.

"The facilities there are state-of-the-art, very modern and very attractive," he said.

"The timing of the race makes it even more appealing: it's something quite special and uniquely fun to race from day into night.

"Admittedly, 'fun' is not exactly the right word to describe the race I had on Sunday in India.

"However, I hope that what we learned about our car across the weekend can be translated into something positive in Abu Dhabi."

Mercedes has not scored any points since September's Singapore GP.

Team boss Ross Brawn acknowledged that such form was much below the team's expectations, but remained confident that its development efforts would pay off before the end of 2012.

"Our team has had a challenging time during the season-ending flyaway races so far," he acknowledged.

"However, we are continuing to work hard on improving our performance, while also taking the opportunity to look at developments which will be relevant next season.

"We would like to end the season on a positive note, and hope to have a stronger result this weekend."