Schumacher fastest on Day 2 at Jerez

The German topped the timesheets on the second day of the first pre-season test in a 2011-spec Mercedes W02. 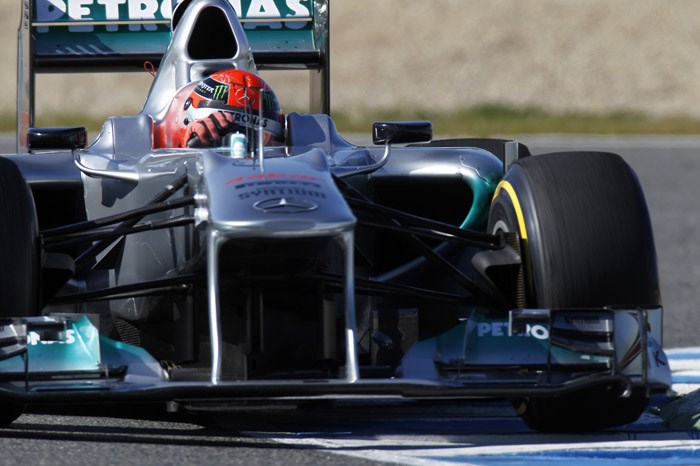 Michael Schumacher led the way in the second morning of Formula 1's pre-season test at Jerez, while Mark Webber was the best of the runners in 2012 machinery.

It was the Australian who set the early pace as he dropped down to a 1m19.184s, at the time putting him 1.1s clear of the field.

While all eyes were therefore on Webber and the RB8 - the car with which Red Bull is bidding to defend its 2011 crowns - it was Schumacher who stole the limelight with a series of blistering laps.

That was comfortably enough to put the German top halfway through the second day, with Webber - unable to improve on his early time – finishing second, more than half a second down.

Daniel Ricciardo was the only other driver to dip below the 1m20s mark, putting him third fastest at the midway mark of a session in which yesterday's pacesetter Kimi Raikkonen suffered an early off at Curva Dry Sac.

The Finn had completed just four laps when he ran wide and into the gravel at the tight right-hander. He was able to rejoin, but damaged his car on the kerbs as he did so.

He also dragged gravel onto the track, leading to the first of two early red flags – the second following shortly after for further checks at the corner.

Lotus took the opportunity to not only repair his car but also adjust the steering column, and when he was able to get back underway he quickly rose to fifth – behind Force India reserve driver Jules Bianchi, who completed 46 laps before handing over to Paul di Resta for the afternoon.

Felipe Massa was little more than three tenths further back for Ferrari, with the team again choosing to focus on aerodynamic and set-up work rather than chase outright laptimes.

Sergio Perez, taking over Sauber duties from Kamui Kobayashi, edged Caterham's Heikki Kovalainen for tenth. The Finn put yesterday's broken starter shaft woe behind him by completing 78 laps, the most of any driver.

Pedro de la Rosa in the 2011 HRT rounded out the morning's runners.