Schumacher a 'credit' to F1: Sauber 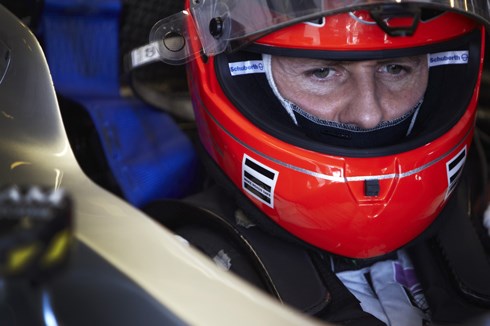 Michael Schumacher remains 'a credit' to Formula 1 despite his comeback having not delivered the success he had hoped for, according to man who helped him enter the sport 20 years ago this week.

As Schumacher heads to the Belgian Grand Prix on the 20th anniversary of his debut, team principal Peter Sauber says that the seven-time world champion is handling the difficult circumstances of his return well.

He has also revealed that Schumacher only found out the truth behind his entry - that Sauber's own team paid Jordan £150,000 (around Rs 1.2 crore in today's terms) for his race appearance – as he prepared to leave the sport in 2006.

In a wide-ranging interview with German news agency SID about Schumacher, Sauber said that he was surprised about his return to F1, but thinks it has been ultimately positive for the sport.

"The reasons for his comeback are none of our business. But still today I say Michael is a credit to F1 even if he does not fight for victories," said Sauber.

"I still find him as a balanced and relaxed individual. My impression is that at the moment he is handling a not easy situation very well."

Sauber also believes that Schumacher will see out his contract at Mercedes, despite rumours that he could walk away from F1 at the end of the year.

"Those are speculations that I don't want to comment on," he added. "Next year I am sure he will still be driving, I am convinced that naturally he will fulfil his contractual commitments. What happens after cannot be predicted. However, I had never thought back then that he would make a comeback."

Looking back at Schumacher's entry to the sport 20 years ago, Sauber said he did not wish to take too much credit for funding his entry – because the idea had been that of Mercedes.

"Success has many fathers, failure is an orphan," said Sauber. "But naturally I am regularly asked about the race in Spa, exactly how Michael's first race for Jordan came to pass. Michael himself did not know the circumstances until his retirement.

"Michael, Heinz-Harald Frentzen and Karl Wendlinger were our junior team for Sauber Mercedes in the Sportscar World Championship.

"The plan then was that Sauber would enter F1 in 1993 together with Mercedes. So it was quite normal that we would have facilitated Michael's first race by paying Eddie Jordan the required sum of money."

Sauber says he only told Schumacher about what had happened at the 2006 Brazilian Grand Prix, which was supposed to be the German's final race in F1.

"He was clearly surprised when he discovered the full circumstances during his retirement race in 2006 in Brazil," said Sauber. "He thereafter sent me a helmet. I do not expect any more [gratitude]. Michael made his own way through his career by being fast."

Sauber believes that one of the keys to Schumacher's success in F1 has been his hard-working nature.

"Speed alone is not enough," he said. "Frentzen, for example, had an equal amount of talent, possibly a bit more. But Michael was a very hard worker, was very ambitious, mentally strong and physically always perfectly prepared. That is why it was noticeable from early on that he was a special talent."