The Indian continues to run in the top 50 as the event turns into a rally of attrition. 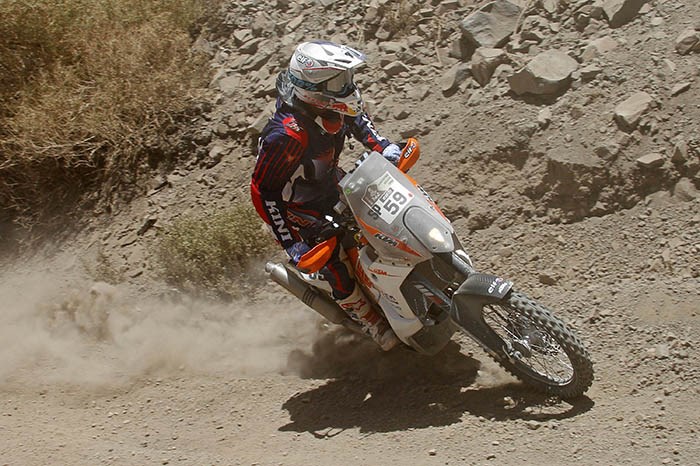 On day four of the toughest motorsport event on the planet, Indian rider CS Santosh showed steady progress as he continued to post consistent times through the stages as the event entered Chile after having traversed Bolivia for the opening four days.

Santosh had a small spill in the second stage, resulting in a shoulder injury which has ended up as the limiting factor for the Indian rider, given the fact that the Dakar is extremely gruelling physically.

Evidence is in the fact that the number of bikes running is down to 115, from 160+ riders who had completed the opening stage. Day four casualties included early favourite and opening stage winner Sam Sunderland, who crashed and put himself out of contention in the fourth stage. The KTM factory rider suffered a collarbone and shoulder injury as a result.

It was a good day for Sherco – TVS as Frenchman Alain Duclos posted the sixth fastest stage time and made his way back into the top 10 overall after having slipped down to 12th on the day two.

Nasser Al-Attiyah has extended his lead after stealing the stage win from teammate Nani Roma in the final kilometers, who is too far behind to pose a threat in the overall standings. Giniel de Villiers ended the stage in third place.

Orlando Terranova hit a stone at the 72km mark and sat stationary for hours. It has not yet been confirmed, but after winning two of the first three stages, he's abandoned his Mini and the rally.

Carlos Sainz also stopped his Peugeot due to mechanical issues and eventually turned back in search of his assistance truck where he remained for hours. Robby Gordon, trying to fight back from issues in the second stage, lost dozens of minutes due to another issue with the 'Gordini.'