Santosh breaks into top 50 at the end of day 7 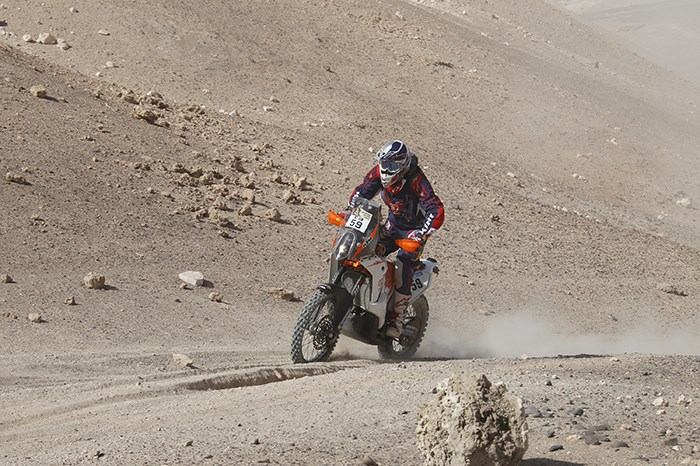 Santosh breaks into top 50 at the end of day 7

After hovering around the fringes of top 50 for the past week, Indian rider C S Santosh finally broke into the half-century mark as he was classified 49th overall at the end of day seven.

The 31-year old, riding a KTM Rally 450 for Team Kini Red Bull mounted a solid charge despite enduring several spills along the 320 kilometre stage, one of which ended up smashing his helmet (his second in this week). He had also suffered a hairline fracture on his toe a couple of days ago but a gritty Santosh refused to let it get in the way of progress.

“I have never felt so tired in my life. The Dakar is the toughest thing I have ever faced. Can hardly stand today", said Santosh at the end of the day.

With a huge storm opening up making things even more difficult, Santosh managed to brave the storm (literally!) and finish the stage 66th. This helped him move up a couple of spots in overall standings and finish 49th at the end of the day.

Sherco – TVS’s Dakar seems to be progressing at a more consistent pace, with French rider Alain Duclos continuing his charge. An engine change for both machines on rest day meant both Duclos and teammate Fabien Planet endured 15-minute penalties, but it did little to affect their overall standings. Planet lies 23rd after stage 7.

In cars, it was Nasser Al-Attiyah who maintained his Dakar Rally lead at eight minutes as the event reached its rest day, with fellow World Rally Championship regular Yazeed Al-Rajhi scoring his first stage win.

Giniel de Villiers had carved three minutes out of Al-Attiyah's lead on stage seven on Saturday, and made further gains early on stage eight, helped by his X-raid Mini driver stopping to change a wheel after a puncture

But Al-Attiyah was able to peg the Imperial Toyota back late on the stage, with de Villiers frustrated by a low-flying helicopter affecting his vision.

Al-Attiyah therefore maintained his outright cushion at 8m27s heading into the break.

2015 Dakar Rally
At the end of day seven