The Indian rider suffered third-degree burns when his bike caught fire on fourth leg of the Abu Dhabi Desert Challenge. 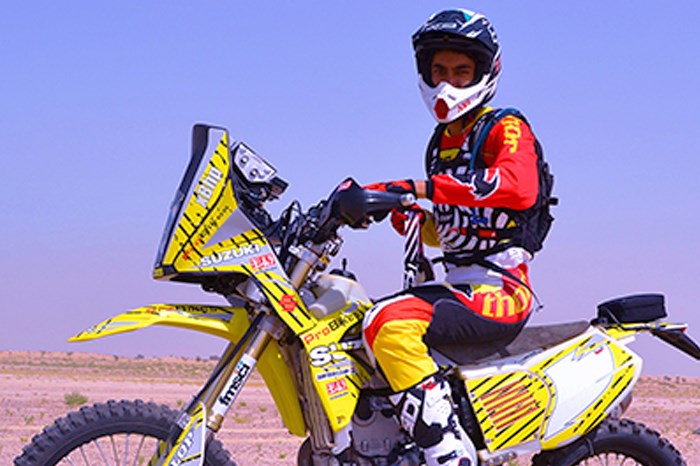 India's best off-road rider C S Santosh returned home after his debut in the FIM World Cross Country championship at Abu Dhabi a fortnight ago was cut short abruptly after his bike caught fire on day four of the event, forcing him to drop out due to third degree burns.

The Bangalore native was running well in the top 15 and was a few kilometers from crossing the finish line of the fourth leg of the six-day Abu Dhabi Desert Challenge, when a fuel overflow issue and an overheating bike lead to a fuel fire which melted his riding gear and scarred parts of his body.

He was luckily rescued when a four-wheeler class competitor stopped by and helped him evacuated to the hospital by a rescue chopper, where he underwent first-aid followed by skin grafts.

“You never think you’ll be on fire while riding a bike, even though as a racer you tend to think of all sorts of scenarios in your head – breaking bones, blacking out, going off a cliff and so on”, exclaimed Santosh, who is expected to continue recovering for another four months at the very least.

“But I never thought that I’d be on fire”, he added.

Recounting the course of events, Santosh said, “It was a really hot day and the bike was overheating a bit. I contemplated stopping but the finish wasn’t far, so I thought that I’d make, using high gears to cool the engine and so on. In retrospect, I should have just stopped.”

“I had been running a little low on the fuel too so I switched on the secondary fuel tank (located at the back of the bike) which pumps fuel into the main tank while riding”, he added.

However, during the fuel transfer, some fuel overflowed and came in contact with hot engine parts, which resulted in an unexpected fuel fire, leaving Santosh with third degree burns and ending his rally prematurely.

As disaster struck, Santosh was set to finish the stage comfortably in the top 15 with the finish almost in sight, and he was forced off the bike in the middle of the desert.

“Having realised there was a fire, I immediately got off and just stood there, frozen, for a few seconds as my riding gear zipper and helmet strap melted.”

“I certainly hadn’t expected anything like this to happen and I most certainly didn’t want to breathe my last in the middle of a desert while being on fire”, he exclaimed.

Santosh lost more precious seconds as he frantically tried to undo his riding gear and helmet with no success before deciding to roll himself in the sand to douse out the flames.

“I was quite tired and drained out, it was near the end of the stage so as you can imagine I wasn’t too sharp. I was surrounded by sand and yet couldn’t think of a way to put out the fire!

Luckily the crew of the BMW X-Raid team stopped to help Santosh and remained by his side until the rescue chopper arrived.

Despite the near-fatal experience, Santosh is still focussed on his ultimate goal, the Dakar.

"Now that the worst is behind me, I just want to recover, train and get back on the bike as soon as possible to continue my preparation for the Dakar.

“This experience has me even stronger in my resolve and I will be working towards it full-steam from now on”, he concluded.