Marquez waited until the very last lap to move past Quartararo, crossing the line 0.903sec ahead of the rookie. 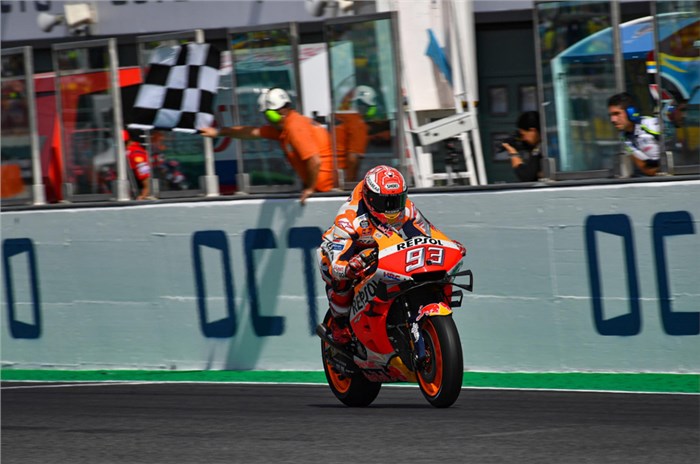 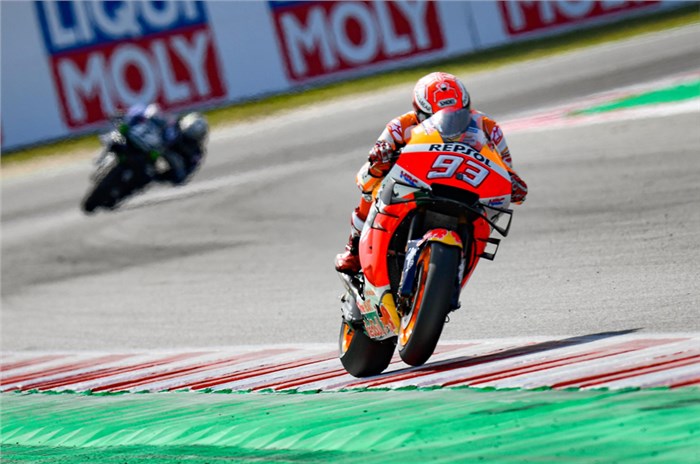 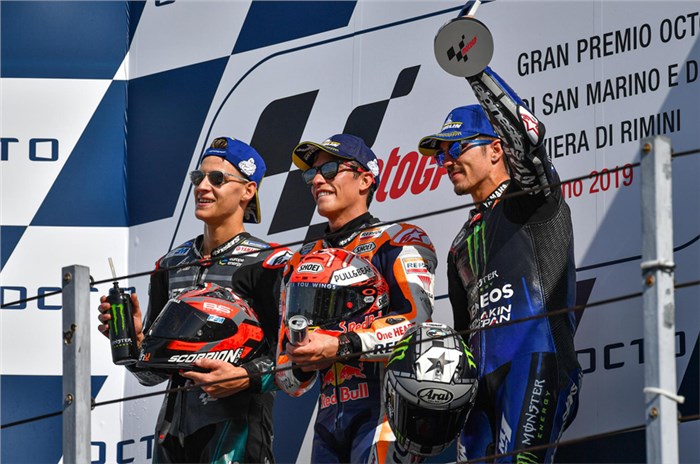 Marc Marquez’s final lap move past Fabio Quartararo saw him clinch victory at Misano and extended his lead in the MotoGP championship to 93 points. This also happened to be his 77th career victory, putting him past the late Mike Hailwood and 4th on the list of most victories.

The race started with Maverick Vinales on pole. The Spaniard got off to a good start but couldn’t hold onto the lead and Quartararo moved past him before the end of the first lap. By this point, Marquez, who started 5th, had picked off Pol Espargaro and Franco Morbidelli to move up to 3rd, behind the lead pair. By the time Marquez pulled off a move past Vinales to climb up to 2nd place, Quartararo was a second ahead and pulling away.

However, it took the reigning champion only a couple laps to bridge the gap and he was right on the tail of the Quartararo’s Yamaha Petronas SRT until the very last lap. The Frenchman kept his calm under pressure but the last lap plunge moved Marquez into the lead. While Quartararo kept Marquez in his sights through the next few corners, he had to roll off the throttle to avoid running into the Honda, and was forced to settle for 2nd place.

Vinales finished in 3rd place, 1.6sec behind the winner with the factory Yamaha of Rossi crossing the line in 4th, just over 11sec behind. Quartararo's Petronas teammate Franco Morbidelli finished 5th, making it four Yamahas in the top five. Andrea Dovizioso managed a 6th place finish in what has been a difficult weekend for Ducati, while Pol Espargaro who stood a chance of a better finish after starting in 2nd place, came 7th. Joan Mir brought home 8th place for Suzuki, ahead of the Pramac Ducati of Jack Miller and factory Ducati of Danilo Petrucci.

Zarco, who will be leaving the factory KTM team at the end of this season, crossed the line 11th, ahead of the sole Aprilia of Aleix Espargaro in 12th. His teammate Andrea Iannone missed the race after suffering an injury in FP4.

It was a difficult day for Alex Rins, who received a long-lap penalty only to crash out of the race before he could serve it. Francesco Bagnaia and Miguel Oliveira went out at the same corner. The LCR Honda pair of Takaaki Nakagami and Cal Crutchlow, along with Ducati wildcard Michele Pirro also suffered DNFs.