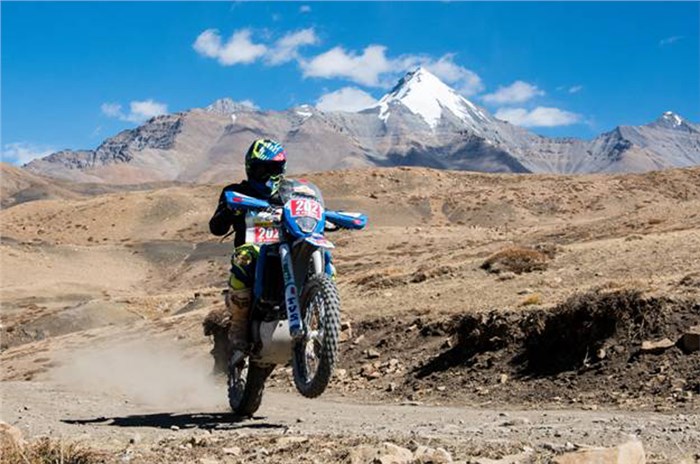 Saikia was an early favourite for the win after he grabbed the lead on the second day. He then held on to that lead over the next two days to win the rally by a margin of 10.53min. 2015 winner AVS Gill finished 2nd overall in his Maruti Suzuki Grand Vitara, while Haree Rallying’s Himanshu Arora rounded off the top three.

It was a challenging event for Team Mahindra, with both Amittrajit Ghosh and Phillipos Matthai losing valuable time due to punctures, which put them out of contention for the win, despite leading the rally on the first day. Ghosh ultimately recovered to claim 4th place overall.

In the Moto Xtreme category, Nataraj took victory after the leading the rally from the very beginning. His TVS teammate Imran Pasha claimed 2nd place, while Vishwas SD slotted into 3rd place, ahead of Jatin Jain.

Elsewhere, Vinod Rawat and Ashok Munne completed the event using stock bikes with no modifications. The bikers were differently-abled entrants at the 2018 Raid de Himalaya, both having lost a limb in the past. Rawat and Munne finished 2nd and 3rd overall in the Group D category, while Vishal Das grabbed the win.

Vijay Parmar, President Himalayan Motorsport, said, “Raid 2018 was very difficult. We kept facing bad weather at every turn. For the first time, we encountered temperatures as low as -16deg. Wind chill was well over -20deg, making the going really tough for the bikers.”

Parmar added that reducing the Raid de Himalaya format to four days helped keep the competition alive till the very end. “The Raid has usually been six days long. By Day four, the likely winners usually emerge and it’s just a question of holding on to your lead after that,” he said.