Rossi made it over the line just 0.174 seconds ahead of Andrea Dovizioso, denying Ducati its first MotoGP win since October 2010 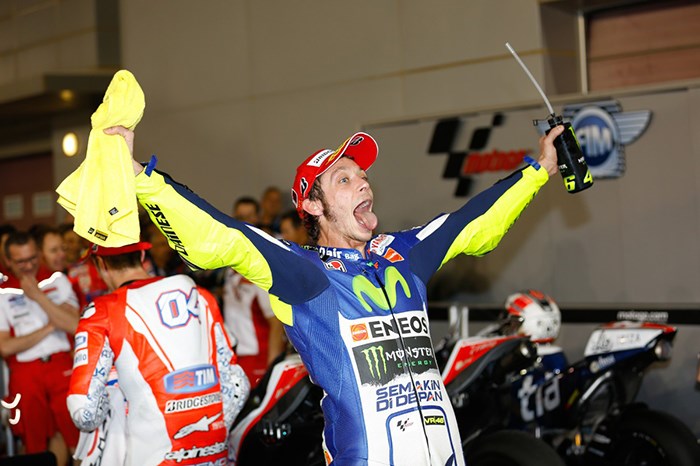 Rossi made it over the line just 0.174 seconds ahead of Andrea Dovizioso, denying Ducati its first MotoGP win since October 2010 by a tiny margin at the end of a race-long battle that also involved their pair's team-mates Andrea Iannone and Jorge Lorenzo.

Marquez produced a superb comeback ride having gone off the road and fallen to 25th and last at the first corner of the race, but once through the pack he lacked the pace to catch the top four.

Lorenzo was Yamaha's top man for most of the night. He made an assertive start and then elbowed Dovizioso aside further round the opening lap.

As Lorenzo and Dovizioso swapped the lead repeatedly, stalked by Iannone, Rossi was making his way through from 10th following a low-key first lap.

He was soon right up with the top four, and as the race went into its final stages he emerged in second behind Dovizioso, with the pair then making a slight break.

The Ducati had better straightline speed than the Yamaha and was able to repeatedly pass Rossi and Lorenzo on the long main straight, although Dovizioso was not always able to hold that advantage when it got to the Turn 1 braking area.

Rossi and Dovizioso were side by side past the pits (and around much of the back of the circuit too) countless times, but as they emerged from another dice through Turn 1 on the final lap, Rossi managed to inch out a very slight advantage.

Although Dovizioso came back at him, the Ducati could not get quite close enough to the Yamaha to win the crucial drag race to the flag as Rossi began 2015 with victory.

Ducati could still celebrate a superb start to the year with a double podium for the still very new GP15, because Iannone won his late battle with Lorenzo and claimed his first MotoGP podium.

Marquez had ended up shooting across the Turn 1 run-off at the start when he ran out of space in the crowded braking area.

His initial progress was very rapid, but it took longer to get through the top 10.

By the time he made it past Honda team-mate Dani Pedrosa into fifth, the lead quartet were four seconds clear and he was only able to chip away at that deficit, eventually finishing 7s off the lead.

Cal Crutchlow emerged on top of a battle with Tech 3 Yamaha duo Bradley Smith and Pol Espargaro for seventh, while Yonny Hernandez faded back to 10th behind them after a very strong first half of the race in which he held off the works Hondas for a long time.

Suzuki had to settle for a quiet 11th and 14th on its return with Aleix Espargaro and Maverick Vinales.