Seven-time MotoGP champion Rossi had questioned his long-term future during a tough 2013. 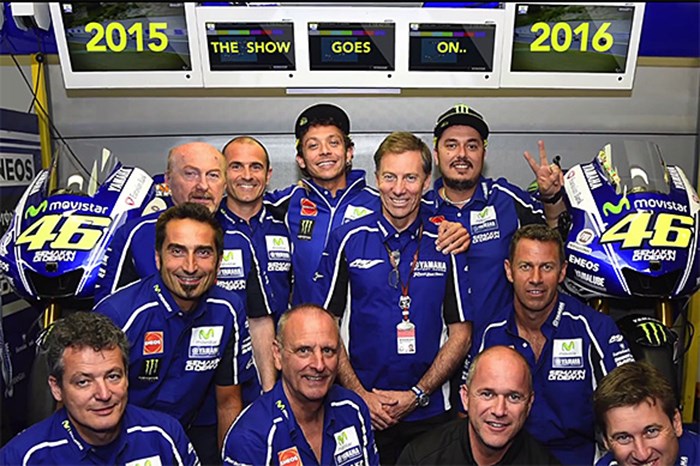 Valentino Rossi and Yamaha have finalised a two-year extension to their MotoGP deal, ensuring the Italian will continue racing until at least 2016.

Seven-time MotoGP champion Rossi had questioned his long-term future during a tough 2013, but a string of podiums at the start of this year's campaign - in which he has so far had the upper hand over team-mate Jorge Lorenzo - convinced him to continue racing.

He made clear in recent months that he wanted a two-year deal from Yamaha, and said at Assen last weekend that an agreement was a formality, with an official announcement made on Wednesday afternoon.

"I am very proud of this announcement. It's very important to me because I really enjoy working with my crew and all the guys from the team, both the Japanese and European members that have been with me almost my entire career," said Rossi.

"It's great because this was my target; I wanted to continue, I am feeling good and I'm motivated to keep giving my best."

Rossi is in his second stint with Yamaha, having won four of his seven MotoGP titles with the team during his initial sojourn from 2004-10.

He then left for two unsuccessful seasons with Ducati before returning in 2013.

Yamaha chief Lin Jarvis said Rossi's renewed motivation had been key to both his strong season and his new contract.

"Since his return to Yamaha in 2013 it's been a very positive experience for everybody involved," said Jarvis.

"After two difficult years 'away from home' Valentino returned last year, not only to us but also to his beloved YZR-M1.

"Fans of racing across the world were happy to see him rediscover his competitive performance and witness him take pleasure in riding and having fun again on two wheels.

"The 'fun factor' is crucial to Valentino to get results - in fact when he first joined us in 2004 one of the most important motivations for his move to Yamaha was his desire to create an environment where he could enjoy racing."

Rossi's team-mate Jorge Lorenzo has yet to agree a new deal with the squad.

Lorenzo said at Assen that financial details were currently the main stumbling block.