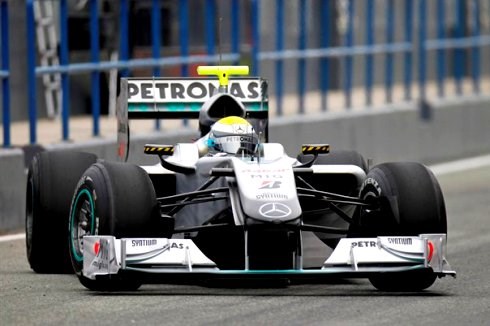 Mercedes driver Nico Rosberg topped the time sheets throughout the opening day of the second official Formula One test. However, times were less meanigful than normal, as only the first hour of the test was completed in the dry. Once the rain began to fall, most teams opted to send their cars out on track for only short runs.

However, McLaren caught the attention by running several ungainly wind flow sensors and probes early on. "We feel it's necessary to put as much emphasis as we possibly can on accurately measuring the flow structures we encounter at the track so that we can match them to the flow structures we are able to simulate in CFD," a team spokesman explained.

The Force India VJM03 also ran in public for the first time, with Vitantonio Liuzzi driving the car that Adrian Sutil shook down at Silverstone. The Italian was seventh fastest, four seconds off Rosberg's mark, but like Webber the time was set while the car was completing installation laps after missing last week's Valencia test. "In the dry, the balance felt good," said Liuzzi, who completed 71 laps. "Although when it started to rain it made it more difficult to judge how the car was."

Fernando Alonso, on his second appearance in the Ferrari, was fourth fastest. The Spaniard missed most of the morning running after setting his time early on, but the team's hopes that the track would dry were unfulilled and he completed several longer runs in the afternoon, racking up 88 laps. "We're satisfied, because we could collect lots of data, which is important for the reliability," Alonso said. "We hope that the weather is better tomorrow, because it's important to drive on a dry track, too. "The car went very well on the wet track though and it's easy to drive. The feeling is good, just like on the dry. All in all I had some positive sensations today."

Virgin Racing became the first new F1 team to run at an official test session, albeit with driver Timo Glock initially completing only one shakedown lap before returning to the pits, and then running a brief three lap stint in the wet.