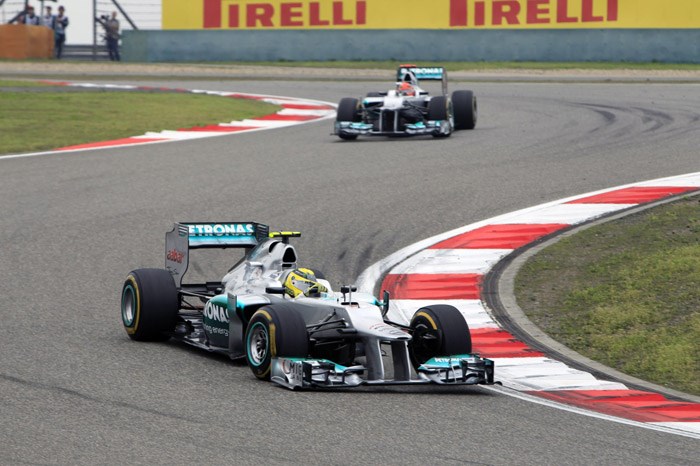 Nico Rosberg finally claimed his maiden Formula 1 race victory, and a first win for the modern incarnation of the factory Mercedes team, with a commanding drive in a thrilling Chinese Grand Prix.

The result made Rosberg the first new winner since Mark Webber took victory in the 2009 German Grand Prix. The last triumph for a works Mercedes was back in the 1955 Italian GP with Juan Manuel Fangio.

At a track where he had led only to fade in each of the last two years, Rosberg ensured he stayed at the head of an absorbing race in which myriad tyre strategies played out through a lead pack that sometimes grew to a dozen cars.

Not only did drivers vary between two and three pitstops, but there were huge differences in stint length. Despite Mercedes' tyre difficulties in the opening two 2012 races, this time the team handled the rubber perfectly - allowing Rosberg to deploy a textbook two-stop strategy and keep himself ahead of most of the action.

The German pulled away from his team-mate Michael Schumacher in the opening laps, soon establishing a four-second lead. Schumacher's chance to feature in the lead battle then ended when he retired with an incorrectly fitted right-front wheel immediately after his first pitstop.

Button was Rosberg's main threat thereafter. A great start immediately took him to third, and he was catching Rosberg on a three-stop plan for a while, only for Rosberg's pace immediately after his final stop to secure his victory even before Button's lost several seconds with a left rear wheel issue at his final pitstop.

Kimi Raikkonen's two-stopping Lotus held second going into the closing stages, but trying to do half the race on his third set of tyres proved too optimistic, and he tumbled from second to 14th in just a handful of laps.

Vettel, following a similar strategy, was first to pass Raikkonen, and looked like he might salvage second from his qualifying disaster. He could not hold off the McLarens or Webber with their fresher tyres from a three-stop strategy, with Button getting through five laps from the end and Hamilton and Webber doing likewise amid a thrilling tussle over the last two laps. Webber took fourth despite his first pitstop coming as early as lap six, and two trips off the road - one of which featured a wild flight over the Turn 13 kerbs.

While Raikkonen fell back, his team-mate Romain Grosjean did a two-stop plan with a very long middle stint and was able to battle to sixth, ahead of Williams duo Bruno Senna and Pastor Maldonado.

Sauber was a factor in this pack but could not repeat its Malaysian heroics. Kamui Kobayashi fell back with a poor start and finished 10th, just ahead of team-mate Sergio Perez, who led for a while on a two-stop plan. Paul di Resta (Force India) and Felipe Massa - who also led for a spell in his Ferrari - followed them home.