Rosberg ended up exactly one tenth of a second quicker than his team-mate once both had completed their quick runs. 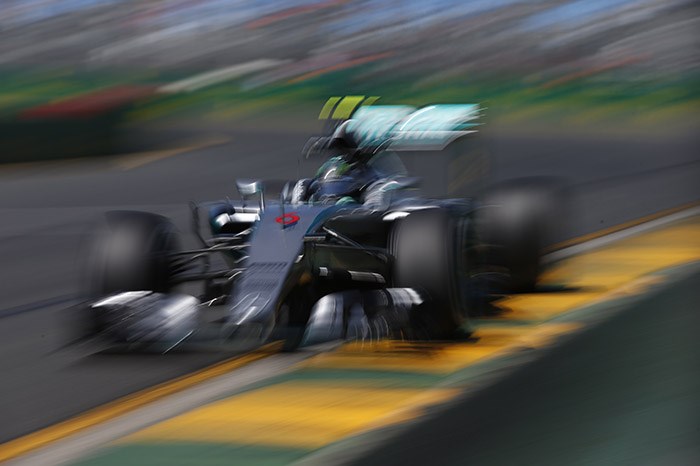 Nico Rosberg pipped Mercedes Formula 1 team-mate Lewis Hamilton to the top of the timesheets in the second free practice session for the Australian Grand Prix.

Rosberg ended up exactly one tenth of a second quicker than his team-mate once both had completed their quick runs after switching to the soft-compound Pirellis.

The German had slipped to third overall based on his pace on the mediums thanks to Ferrari pairing Sebastian Vettel and Kimi Raikkonen bolting on the softs and temporarily taking first and second places.

But at around the halfway point of the session, Rosberg set his fastest time on softs, beating Vettel by 0.715s.

Hamilton then attempted to hit back, but despite setting the fastest time of the session in the middle sector of the Albert Park circuit, could not overhaul his team-mate.

Vettel and Raikkonen held on to third and fourth places, with Raikkonen just over seven tenths slower than his team-mate but admitting over the radio that it was "not a very good lap".

Valtteri Bottas was fifth fastest for Williams, 1.568s off the pace, but team-mate Felipe Massa was unable to run thanks to a water leak that was detected ahead of the session.

Red Bull also had only one car running thanks to the need for an engine change on Daniel Ricciardo's machine.

But team-mate Daniil Kvyat was sixth fastest, albeit 2.319s off the pace and only just ahead of Carlos Sainz, who was the fastest of Red Bull's 'B-team' drivers at Toro Rosso.

Sainz, who also showed well in the first session, again had a strong run, but did suffer a brief spin on the entry to the Turn 15 left-hander with 26 minutes remaining.

Lotus pairing Pastor Maldonado and Romain Grosjean were eighth and ninth fastest, although both endured brief off-track moments early in the session.

Maldonado ran wide onto the grass exiting Turn 15, while Grosjean slid through the gravel at Turn 3.

The Sauber team made its first appearance of the weekend after sitting out the opening session amid its court case with Giedo van der Garde.

Felipe Nasr and Marcus Ericsson were the first two drivers to head out onto the circuit, with the former ending up 11th quickest ahead of the second Force India of Sergio Perez.

But Ericsson had a more troubled session thanks to a problem with the left-rear corner cropping up as he exited the final corner.

Ericsson suspected a suspension problem, with the team saying that the wheel was rubbing on some bodywork, and he was unable to return to the track.

After a troubled first session, during which both Jenson Button and Kevin Magnussen faced restricted running thanks to an air intake problem, McLaren again struggled.

The Dane, filling in for Fernando Alonso, crashed at Turn 6 on his fifth lap after losing the rear end and being spat into the gravel while attempting to recover.

Magnussen was uninjured, but his crash brought out the red flag for seven minutes while his car was recovered.

Button ended the session 13th, 3.690s off the pace, and one place ahead of the second Toro Rosso of Max Verstappen, whose running was limited to just six laps because of a battery problem.

Only 16 drivers were able to set a time thanks to the problems for Massa and Ricciardo, with Manor pairing Robert Merhi and Will Stevens also not participating.

The Manor team is continuing to work to reinstall software needed to operate the car, a consequence of all of its hard drives being wiped prior to the planned auction of the teams assets that was cancelled once an investor was found.