Rosberg quickest on day 3 at Jerez 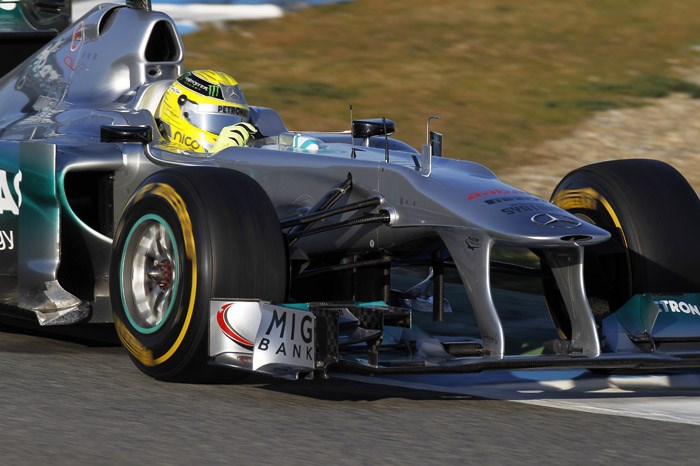 Nico Rosberg ensured Mercedes ended day three of pre-season testing at Jerez on top, while Romain Grosjean's Lotus was the fastest of the 2012-spec cars.

Times fell little in the afternoon of day three, which was as notable for driver changes as it was for on-track action - Sebastian Vettel, Lewis Hamilton and Fernando Alonso among those getting their first taste of their new machines.

Grosjean too made his first appearance in the Lotus E20, but needed little time for adjustment as he got down to a 1m18.419s - the fastest time from a 2012 car thus far in testing – before the midway stage.

That left him a healthy eight tenths clear of his 2012 competition, which was headed by Vettel in the RB8 and Hamilton in the MP4-27.

The Briton had the advantage over Vettel as the unofficial lunch break loomed, but the German found time in what was generally a slower afternoon to jump back in front, ending the day 0.167s ahead of Hamilton.

They were all left trailing by Rosberg however, with the German comfortably fastest on what was Mercedes's final day of testing at Jerez – and the final day for their 2011 car, with this year's challenger set to be introduced at the next test in Barcelona.

Jean-Eric Vergne ended the day fifth fastest for Toro Rosso, just 36 thousandths ahead of Sergio Perez, whose day was interrupted by an oil transmission issue. The Mexican's fastest time was set on medium compounds and in the cold conditions of the early morning.

Those conditions caught out Jules Bianchi, who assumed driving duties in the morning for Force India.

The Frenchman lost the rear end and skipped across the gravel at Sito Pons, bringing out the first of the day's three red flags – the second coming after Giedo van Der Garde beached his car in the gravel and the third just before the chequered flag as Grosjean stopped out on circuit.

Force India was unable to repair the damage, with Nico Hulkenberg therefore unable to take over in the afternoon. He will hope to get his first taste of the car tomorrow as the team scrambles to get parts out from the UK.

A throng of Spanish fans didn't have too much to cheer as home favourite Fernando Alonso could only finish seventh, the Spaniard completing 67 laps in another low-key day for Ferrari.

Bruno Senna in contrast completed 125 laps – the most of any driver – for Williams, ending the day in eighth.

Van der Garde, who was able to rejoin once his car had been recovered, was ninth, with Bianchi – unable to register a time – in tenth.