On a soft-tyre run in the second session at the Mexico City track, Mercedes driver Rosberg was quickest with a lap of 1m21.531s. 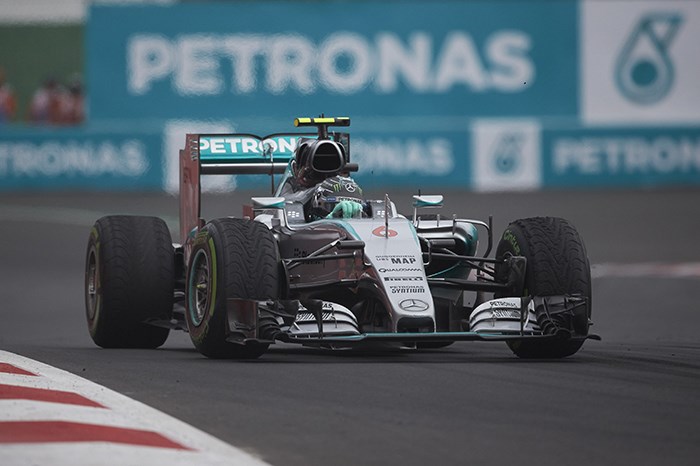 On a soft-tyre run in the second session at the Mexico City track, Mercedes driver Rosberg was quickest with a lap of 1m21.531s.

Daniil Kvyat and Daniel Ricciardo were second and third on a circuit that appears to suit Red Bull, finishing 0.245 seconds and 0.337s adrift respectively.

Newly-crowned three-time champion Lewis Hamilton could only manage fourth, 0.430s behind team-mate Rosberg, although his attempts to set quicker laps were often thwarted by traffic.

As per the first session, the opening half-hour was dominated by a number of spins and incidents.

After leading the way in first practice - albeit controversially so - Max Verstappen's second practice was over inside five minutes, with the 17-year-old sliding into a barrier out of the exit of Turn 16, one of the slower sections of the track.

It brought out the red flags while his Toro Rosso was recovered and started a series of spins and slides for a number of drivers on the very slippery asphalt.

Poor weather conditions in recent months in Mexico City delayed the laying of the top layer of the circuit, and with it still being so new and with oils forcing their way to the surface, it resulted in plenty of action.

After a seven-minute delay under the red flags, Valtteri Bottas was the next to suffer as he lost his Williams under braking at high speed into Turn 1, with the Finn fortunate to only escape with losing his front wing after clipping a barrier.

Turn 1 proved to be particularly troublesome, with Carlos Sainz Jr, home hero Sergio Perez and Pastor Maldonado all going off track at that point.

Sebastian Vettel only just held onto his Ferrari on entry to the pitlane at one stage, while Hamilton spun out of the sharp-left Turn 4, resulting in him facing the wrong way.

With 28 minutes remaining Romain Grosjean became the second retiree of the session, pulling his Lotus off on to the grass at Turn 10 due to a clutch problem, resulting in a second red-flag period as he helped the marshals push his car behind a barrier.

Vettel ended the session fifth overall, a fraction of second behind Hamilton, with his Ferrari team-mate Kimi Raikkonen the only other driver to finish within a second of Rosberg, 0.868s adrift.

Bottas, who also took out the bollard late on that separates the pitlane entry point from the track, was seventh, just over a second back, followed by McLaren duo Fernando Alonso and Jenson Button.

Button spent the opening 45 minutes in the garage due to a deployment issue in the wake of a planned second Honda engine change that means he is hit with a 50-place grid penalty for Sunday.

Felipe Massa completed the top 10, 1.758s down, before a late sprinkling of rain that added to the slippery conditions led to a run on intermediate rubber for a number of drivers to close out the session.