The German was a full half a second quicker than second-fastest Lewis Hamilton. 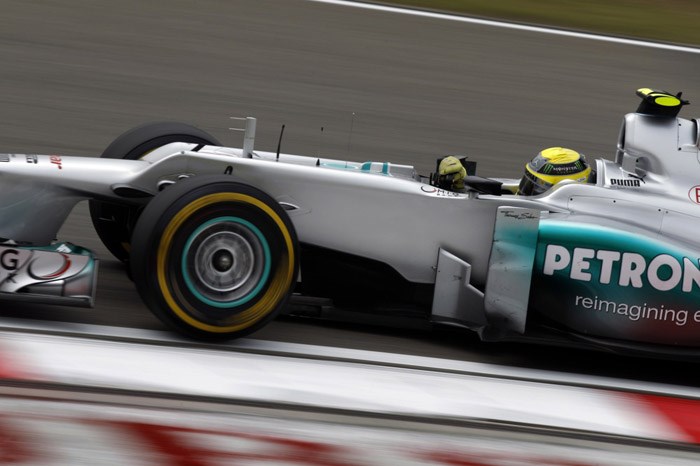 Nico Rosberg claimed a maiden Formula 1 pole position for himself and the current version of the Mercedes team with a commanding performance in Chinese Grand Prix qualifying at Shanghai.

The German was a full half a second quicker than second-fastest Lewis Hamilton, as predictions of a spectacular Mercedes qualifying performance came true. Michael Schumacher will make it an all-Mercedes front row having qualified third fastest, for Hamilton's gearbox change penalty will drop his McLaren to seventh.

While one German celebrated a first ever pole, another had a disastrous result, as reigning world champion Sebastian Vettel could only manage 11th on the grid for Red Bull.

Rosberg had led a Mercedes one-two in Q2, and then blitzed his rivals early in Q3 with an unbeatable 1m35.121s. So confident was Rosberg that the time would hold for pole, he got out of his car and walked off to the weighing area while the rest of the top 10 pack tried in vain to improve their times and catch him.

Hamilton managed to get between the Mercedes in the times, even if he cannot do so on the grid.

His penalty will also move Kamui Kobayashi up to an amazing third place, as the Japanese driver emphasised Sauber's progress by setting the fourth quickest time.

On current form, Vettel had always seemed a long shot for a fourth consecutive Shanghai pole, but to fail to make the top 10 on the grid for the first time since Brazil 2009 was a major shock.

The double champion, running a different exhaust specification on his Red Bull to Mark Webber, was only 0.3s slower than his pacesetting team-mate in Q2, but that was the difference between first and 11th in the extraordinarily close session. Vettel had been gradually edged down the top 10 and ultimately pushed out by Romain Grosjean's Lotus, and though he was still on his final flying lap at the time, it was not quick enough to get Vettel back inside the cut.

A low-key session for Jenson Button and Webber saw the McLaren and Red Bull back in sixth and seventh in the times, behind Kimi Raikkonen's Lotus.

Malaysia combatants Sergio Perez (Sauber) and Fernando Alonso (Ferrari) were together again as they led the way in Q1 after going for softs tyres, and qualified in close company once more in eighth and ninth, ahead of the second Lotus of Romain Grosjean. Felipe Massa was closer to Alonso's pace than of late, but will start 12th.

The second half of the grid will line up in neat team formation. The two Williams share row seven ahead of the two Force Indias, and while Jean-Eric Vergne did not get beyond Q1, he will still start alongside Toro Rosso team-mate Daniel Ricciardo.

It was business as usual at the back, as Caterham led Marussia and HRT, with everyone now comfortably inside the 107 per cent margin.