Red Bull managed just 15 laps with Daniel Ricciardo as the team encountered yet more problems with its troublesome new car. 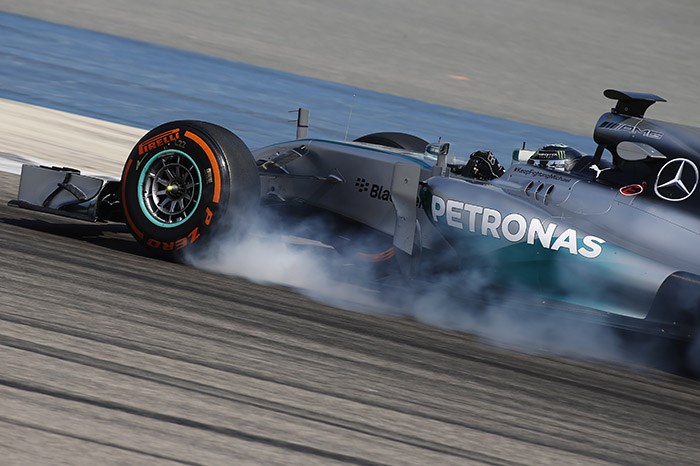 Mercedes led the way for the second consecutive day in Formula 1 testing in Bahrain, as Nico Rosberg set the fastest time of the week while rival Red Bull continued its miserable pre-season.

The three-time grand prix winner became the only driver to break into the 1m33s with a blistering set of short runs on Pirelli's soft tyre in the morning before completing a race run of more than 50 laps in the afternoon.

The team parked the RB10 early with software and mechanical issues and spent much of the afternoon working furiously on the car in the garage.

The other Renault-engined teams also endured a difficult day.

Jean-Eric Vergne completed just 19 laps in the Toro Rosso, while Pastor Maldonado suffered another glut of problems with the Lotus E22, though he did manage 59 laps between issues and the fastest time by a Renault-powered car so far.

Team-mate Kamui Kobayashi took the repaired car out and managed 17 laps in the final hour.

Of the other Mercedes-engined teams, new Williams signing Felipe Nasr managed nearly 90 laps and went fourth fastest on his F1 driving debut, while Force India's Sergio Perez was sixth quickest on his first day in the VJM07, but had his running curtailed by a gearbox issue after just 19 laps.

Kimi Raikkonen bounced back from a telemetry issue yesterday to log 82 laps for Ferrari and post the third quickest time on Pirelli's soft tyre.

He got within two tenths of Fernando Alonso's best lap on day two, but brought the test to an early halt when he crashed his Ferrari at Turn 4.

Adrian Sutil only managed seven laps after Sauber found a problem with its chassis in the morning, while Marussia encountered engine and fuel problems that restricted Jules Bianchi to just five laps.