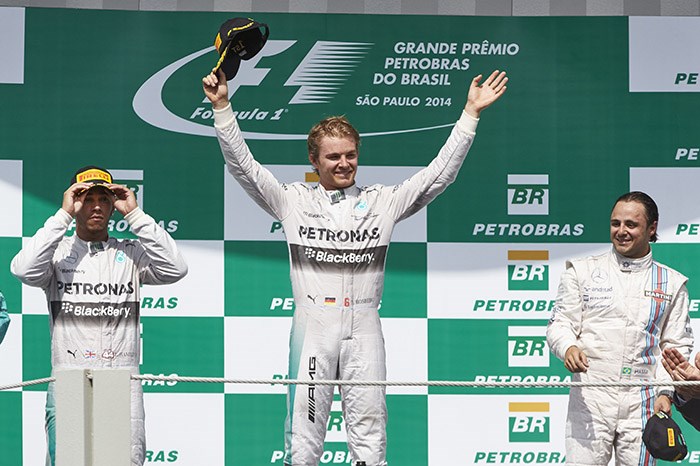 By converting his 10th pole position of the 2014 F1 season into victory, Rosberg closed team-mate Hamilton's points lead down to 17 heading into the Abu Dhabi GP double-points finale.

Hamilton's hopes of challenging Rosberg's supremacy were largely undone when he half spun at the Descida do Lago on lap 28 of 71.

The Brit ran wide after correcting a snap of oversteer as he braked for the corner. He subsequently revealed over the radio that he had wound his brake bias too far to the rear.

Hamilton hustled superbly to recover the time lost to Rosberg, and put him under pressure by remaining within DRS range during a franctic final stint (in which both drivers exchanged fastest laps), but ultimately Hamilton had to settle for second.

Local hero Felipe Massa brought smiles to the faces of the home crowd by completing the podium.

The Williams driver survived a five-second penalty for speeding in the pitlane at his first stop, and the embarrassment of accidentally driving into the McLaren pit at his last, to finish a distant third.

Team-mate Valtteri Bottas should have been well-placed to capitalise on Massa's errors, after running fourth early on, but a lengthy delay at his first pitstop set him back badly, and he lost more time when Nico Hulkenberg's Force India forced him wide while overtaking into the Senna S.

McLaren's Jenson Button took that fourth spot with a brave pass around the outside of Kimi Raikkonen's Ferrari at the Descida do Lago with 10 laps to run.

Their side-by-side duelling also allowed world champion Sebastian Vettel to nip through into fifth in his Red Bull.

Vettel might have finished higher but for ground lost while battling Kevin Magnussen's McLaren on the opening lap, while team-mate Daniel Ricciardo retired shortly before half-distance with a left front suspension problem on his Red Bull.

Raikkonen started 10th and dropped behind the Sauber of Esteban Gutierrez on the first lap, but made progress by being the only driver to complete the race on two pitstops.

The Finn lost time to what appeared to be a front jack problem at his second stop, and defended desperately in a battle of world champions with Fernando Alonso in the closing stages, but ultimately couldn't prevent his Ferrari team-mate passing him for sixth with a handful of laps to go.

Hulkenberg made good use of alternative tyre strategy - running the soft tyre at the end - to finish eighth, ahead of Kevin Magnussen's McLaren and Bottas, who just held off Toro Rosso's Daniil Kvyat to claim the final point.