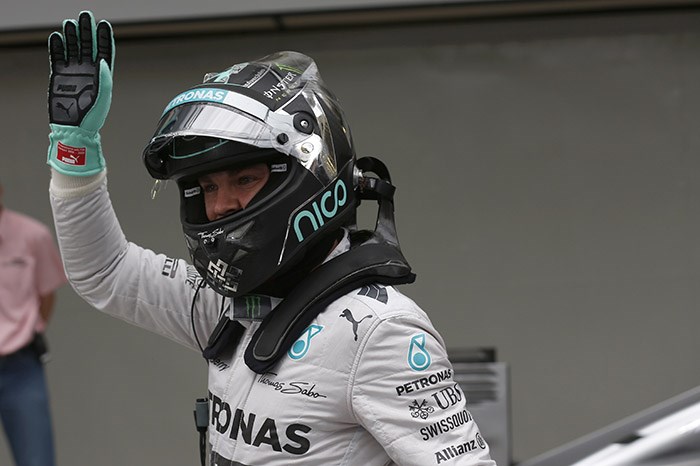 The two Mercedes drivers engaged in a spectacular battle for pole, with Rosberg having the edge by just 29 thousandths on their first runs in the top 10 shootout.

Hamilton then improved his time on his second and final run, briefly knocking Rosberg off top spot.

But Rosberg, behind him on track, then bagged his 10th pole position of the year seconds later.

Williams did look a potential threat for pole position, but after setting the third and fourth fastest times on their first runs, Felipe Massa and Valtteri Bottas failed to improve at the end - Bottas making a small mistake and Massa's run delayed by a technical problem in the garage.

Jenson Button capped a great turnaround from McLaren after a difficult time during Friday practice with fifth on the grid ahead of Sebastian Vettel.

Button secured that position with his first run, but did not improve on his second attempt.

This allowed Vettel to potentially challenge him, but the German ended up eight thousandths of a second behind despite finding almost half a second on his second run.

The second McLaren of Kevin Magnussen was seventh, just ahead of Fernando Alonso, who completed only one run in Q3.

Daniel Ricciardo had a lacklustre, by his standards, afternoon and will start ninth, just ahead of Ferrari driver Kimi Raikkonen.

Sauber driver Esteban Gutierrez was bumped out of a top 10 slot in the dying seconds of Q2 when Ricciardo posted his sole flying lap, ending up 11th.

He was almost four tenths faster than Force India driver Nico Hulkenberg, who had a lock-up into the Senna S on his best lap, with Adrian Sutil 13th and last of those to run in Q2.

Daniil Kvyat was classified 14th and did not run at all in Q2.

This is because he has to serve a grid penalty, carried over from Austin where he used his 10th internal combustion engine of the season but did not qualify well enough to serve his complete 10-place drop.

Romain Grosjean narrowly missed out on a place in Q2 in the lead Lotus, falling a tenth of a second short of beating Sutil to the all-important 14th place.

Three thousandths of a second behind was Jean-Eric Vergne, who complained variously of understeer and oversteer during Q1.

But his struggles were largely a consequence of the fact he could only complete five laps during Friday practice after handing his car over to Max Verstappen in the morning and then suffering an ERS problem in the afternoon.

Sergio Perez was a quarter of a tenth further back after also suffering a dismal Friday during which he was unable to take to the track following reserve driver Daniel Juncadella's morning crash.

He has to serve a seven-place grid penalty for wiping out Sutil on the opening lap of last weekend's United States GP, meaning he will drop behind slowest qualifier Pastor Maldonado.