Rain meant that the majority of qualifying was run using intermediate tyres and Rosberg's first flying lap at the start of Q3, 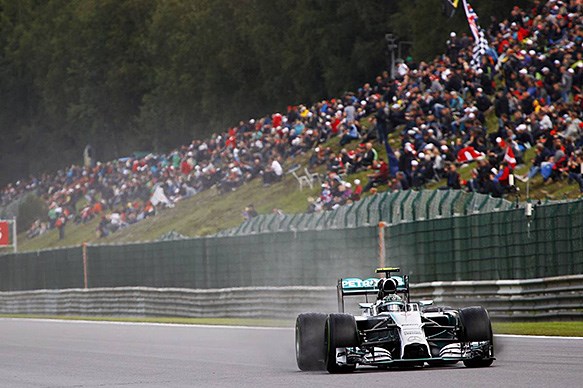 Rain meant that the majority of qualifying was run using intermediate tyres and Rosberg's first flying lap at the start of Q3, a 2m05.591s, proved to be good enough for pole position.

Although Rosberg did switch to a fresh set of intermediates and made a small improvement, he had already done enough to be sure of top spot. He ended up just over two tenths clear of world championship rival and Mercedes team-mate Lewis Hamilton.

Hamilton, who set a slow time on his first flier, which was compromised by sliding wide at the first corner, leading him to ease off, before improving on his second.

He then pitted for fresh intermediates and got down to a 2m05.819s on his final flier, but it was only enough for second.

The pair had held third and fourth after the first runs, but improvements later on served only to defend their positions with the Mercedes pairing out of reach.

Daniel Ricciardo, who had an off-track moment on his final attempt, was fifth fastest ahead of Valtteri Bottas in the best of the Williams cars.

In between them were Kimi Raikkonen and Felipe Massa, with the Finn the biggest loser after the first runs and being bumped from fifth down to eighth.

Scuderia Toro Rosso pairing Daniil Kvyat and Jean-Eric Vergne were the fastest of those eliminated in Q2.

Kvyat put in a lap that temporarily put him eighth in the closing stages of the session, but he was shuffled down the order by improvements by Magnussen, Button and Vettel, all of which were in the drop zone at times late on.

Although Jules Bianchi was slowest in the middle part of qualifying, the Marussia driver was one of the stars of the afternoon after reaching Q2 at Spa for the second consecutive year.

Pastor Maldonado appeared to have made it through to Q2 by improving his time on his final flying lap in a Q1 session that started off wet but improved throughout.

But the Lotus driver was bumped back down to 17th when Sutil also improved in the dying moments, with all the runners by then using intermediate rubber.

This also led to Force India's Nico Hulkenberg being eliminated as he slipped down to 18th ahead of Marussia's Max Chilton having been ahead of both Maldonado and Sutil as they started their final laps.

Hulkenberg admitted to making a mistake at the end of his final lap, which cost him a couple of tenths, also complaining of a lack of braking feel.

Esteban Gutierrez did not have the chance for a proper qualifying attempt as his Sauber stopped on his fifth lap while he was still on wet tyres.

This meant that the Mexican did not get to run in the best of the conditions, ending up ahead of only the two Caterhams.