Hamilton had topped both Q1 and Q2 but was outpaced by Mercedes team-mate Rosberg by 68 thousandths of a second on their first runs in Q3. 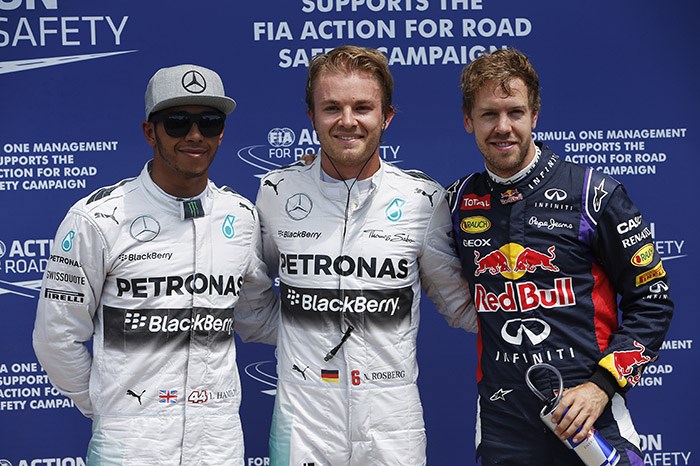 Nico Rosberg claimed pole position for the Canadian Grand Prix after a stellar performance in the top 10 qualifying shootout.

Rosberg's Mercedes team-mate, Lewis Hamilton, had dominated practice, setting the fastest time of Friday and then going quickest on Saturday morning, meaning he went into qualifying as the hot favourite at a track where he thrives.

Hamilton had topped both Q1 and Q2 but was outpaced by Mercedes team-mate Rosberg by 68 thousandths of a second on their first runs in Q3 after hitting traffic in the final sector.

Rosberg then made a small improvement on his second run, but it was not necessary as a poor middle sector meant that Hamilton was unable to better the German's earlier time.

Sebastian Vettel was best-of-the-rest, jumping from sixth to third with a strong final lap.

Williams had looked set to be the closest challenger to Mercedes, but Valtteri Bottas was unable to improve on his final run and ended up fourth.

His team-mate Felipe Massa was fifth fastest, just ahead of the second Red Bull of Daniel Ricciardo.

Fernando Alonso was seventh, his Ferrari not quite showing the pace to threaten the top six.

Jean-Eric Vergne was fastest of those who only attempted one run in Q3, shading McLaren's Jenson Button to eighth place by two-hundredths of a second.

Kimi Raikkonen was the slowest of the Q3 runners, securing 10th place on the grid.

All of the top 10 will start the race on super-soft rubber thanks to new-for-2014 rules dictating that drivers must use the set they set their best Q2 time on.

Nico Hulkenberg missed out on a place in the top 10 shootout by just under half-a-tenth and will start 11th.

The second McLaren of Kevin Magnussen was 12th after failing to improve on his second run.

Sergio Perez, Romain Grosjean, Daniil Kvyat were 13th, 14th and 15th, with Sauber driver Adrian Sutil attempting only one run in Q2 as he had used two sets of super-softs in Q1, ending up 16th.

Pastor Maldonado was the fastest of those to be eliminated in Q1 after his Lotus ground to a halt in the closing stages.

He had just jumped Marussia pairing Max Chilton and Jules Bianchi before he hit trouble.

Bianchi was unable to attempt a second run in Q1 thanks to a car problem, while Chilton had to rely on the time posted on his first run because of incidents late in the session.

Kamui Kobayashi was the faster of the two Caterhams in 20th place after making a good improvement on his final run, although he will be hit with a five-place grid penalty for a gearbox change.

Team-mate Marcus Ericsson brought out a red flag with 16 seconds of Q1 remaining after crashing at the exit of the first chicane.

Esteban Gutierrez was unable to participate in qualifying thanks to chassis damage sustained in a crash during Saturday morning's free practice session.

The Sauber team is building up a car around a spare chassis for the Mexican for tomorrow's race.