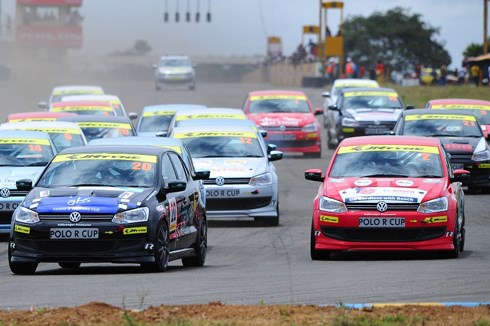 Race one of round two of the JK Tyre Volkswagen Polo R Cup held at Kari Motor Speedway in Coimbatore was won by Rahil Noorani, a 21-year old series rookie from Mumbai. Rahil only managed this after a close duel with Bangalore driver Ajay Kini, driving his first Polo-R Cup race- who ultimately finished in second place, followed closely by championship leader Vishnu Prasad.

Rahil had a great start and led into the first corner followed by Ajay and Avdumber Hede with Oshan Kothadiya from Pune getting past Avdumber on lap two, before battling with Ajay for the rest of the race. Vishnu once again fought his way from ninth on the grid to get past Oshan on the penultimate lap to grab the final podium position. With all cars battling behind him, Rahil cruised to his first ever victory in the Polo R Cup.

Post-race, Rahil said, “It feels great to win. I qualified on pole and the only thing on my mind was to lead into the first corner and take it from there. Ajay gave me a hard time but the most important thing is consistency so I stayed focussed, which helped me to win.”

With reverse grid in place for race two, Vishnu Prasad put in another impressive display to win race two, with Pune lad Oshan Kothadiya finishing in second position ahead of the race one runner-up  Ajay Kini. This marked Vishnu's third win out of four races in the 2011 season.

Vishnu started sixth but quickly moved up the field- and was sitting in a distant third from a battle between Oshan and Rahil Noorani. But the first safety car of the season after a series of crashes saw the margin whittle away, giving Vishnu an opportunity to close up with the leaders. Adding drama to the proceedings, a drizzle towards the end of the race cemented Vishnu’s position further as he opened up a cushion from Oshan. Even though Rahil finished third on the road, a jump-start penalty relegated him down the order to sixth while promoting Ajay Kini to third place.