Rodrigues back in top 10 for Hero after penultimate stage

Sherco-TVS’ Juan Pedrero classified 13th overall to cap off a strong day for the Indian contingent. 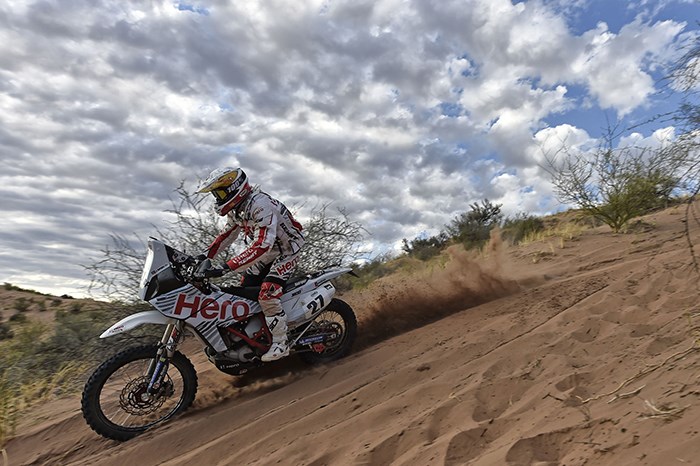 With the last major stage done and dusted, the 2017 Dakar is set to wind down in 24-hours. But, before the champagne is popped, one last special stage of 64 km needs to be finished before the participants head to Buenos Aires for a grand reception for the finish podium ceremony and the winners are crowned.

For Sherco-TVS, it has been a remarkable recovery drive after initial setbacks for both riders. Spaniard Pedro moved up three places after the relatively short 288km special stage, to be classified 13th overall. His teammate Adrien Metge also continued the good work and moved up three places in overall classification as well, to finish 23rd overall.

For Hero Motosports, Joaquim Rodrigues once again showcased great speed and navigational skills belying his status as a Dakar rookie. The Portuguese rider posted the 14th fastest time of the stage and once again clawed his way up to the coveted 10th spot – something he’d be looking forward to holding on with just a 64km special marking the final run to Buenos Aires to culminate the 2017 edition of the world’s toughest race.

His teammate CS Santosh also continued his recovery drive on a stage marked by dunes and hidden summits followed by WRC-style fast, hard-packed and extremely slippery track. Despite having to contend with the dust due to his starting position, he managed to improve on his overall standings and was classified 48th at the end of the day.