The Red Bull racer is making a habit of picking up the pieces when Mercedes trips up, and the Australian executed another flawless race. 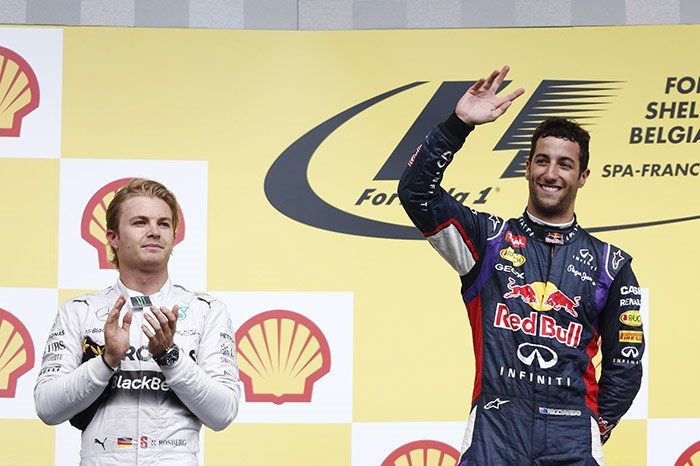 The Red Bull racer is making a habit of picking up the pieces when Mercedes trips up, and the Australian executed another flawless race to fend off the recovering Rosberg by just 3.3 seconds and record the third victory of his flourishing grand prix career.

Rosberg extended his championship lead after a recovery drive to second, while Mercedes team-mate Hamilton posted his third retirement of the season.

Kimi Raikkonen looked set to score his first podium of the season for Ferrari, but ultimately lost out to the Williams of Valtteri Bottas in the closing stages, while world champion Sebastian Vettel won a thrilling late battle for fifth with the McLarens of Kevin Magnussen and Jenson Button, and Fernando Alonso's Ferrari.

The Mercedes drivers locked out the front row by some distance in wet qualifying, but collided on lap two of the race, as slow-starting poleman Rosberg attempted to re-pass Hamilton for the lead on the run to Les Combes.

Rosberg had a look around the outside of his team-mate but clipped Hamilton's left rear tyre as he backed out of the move and tried to tuck back in.

Hamilton limped back to the pits with a puncture and floor damage from a brief excursion, and spent the rest of his race battling a lack of pace in his W05 - and pleading with his team to retire his car to save engine mileage. He eventually retired to the pits with five laps to run.

Rosberg was told to stay out with a slightly damaged front wing after the incident.

That made the championship leader vulnerable, but he retained the lead as the top six ran in a close train early on, before the German dived into the pits to begin the first round of stops on lap eight of 44 and took a new nose.

That dropped him behind Raikkonen's Ferrari, which stopped on the same lap as Rosberg and leapt up from sixth to second as the first round of stops played out.

Rosberg's delay in the pits dropped him to fourth, behind Vettel's Red Bull, while new leader Ricciardo (who crucially passed his Red Bull team-mate when the reigning Vettel saved a wild moment on the exit of Pouhon on lap five) eased away from Raikkonen at the front.

Rosberg switched to an alternative three-stop strategy against the conventional two, and dived into the pits for an early second stop on lap 17, having failed to pass Vettel and fallen behind the Williams of Bottas.

Rosberg used his second set of medium Pirelli tyres to good effect, despite concerns over a front vibration, and rose back up to second when the other frontrunners made their final stops.

Rosberg had to pit for a third time with 10 laps to go, which relieved the pressure on Ricciardo and dropped the Mercedes back to fourth, behind Raikkonen and the Williams of Valtteri Bottas, which slipstreamed past on the run to Les Combes.

Rosberg was quickly back through to third on his fresh set of tyres, passing Bottas at Blanchimont and then nailing Raikkonen easily on the Kemmel straight on the following lap.

Rosberg trailed Ricciardo by just under 20s with eight laps to run and needed to be around 2.5s per lap faster than the Australian to overhaul him, but he ultimately fell short by a handful of seconds.

Bottas recorded his fourth podium of the season in third, while Raikkonen recorded the best result of his season in fourth.

Vettel had been in podium contention, but had to come back through the pack after switching to a three-stop strategy.

He took advantage of the battling between Magnussen, Alonso and Button to claim fifth, while Magnussen just held off McLaren team-mate Button for sixth.

Alonso - who incurred a five-second penalty for his Ferrari mechanics being late away from the grid - damaged his Ferrari in the late battling, which included a three-abreast moment at Les Combes, and trailed home eighth after starting fourth.

The second Williams of Felipe Massa finished a disappointing 13th, behind the second Toro Rosso of Jean-Eric Vergne.