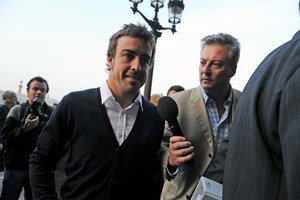 Following a meeting of the FIA's World Motor Sport Council in Paris on Monday, the governing body ruled that the team was guilty of an offence of "unparalleled severity" after causing a deliberate crash in last year's Singapore event.

Although the FIA deemed that the offence was worthy of exclusion from the F1 world championship, it was decided to suspend the ban for two season because Renault admitted to its guilt - and took action against the men involved in the actions – former team principal Briatore and director of engineering Pat Symonds.

A statement from the FIA said that Renault "had accepted, at the earliest practicable opportunity, that it committed the offences with which it was charged and cooperated fully with the FIA's investigation. It had confirmed that Mr. Briatore and Mr. Symonds were involved in the conspiracy and ensured that they left the team; It apologised unreservedly to the FIA and to the sport for the harm caused by its actions; It committed to paying the costs incurred by the FIA in its investigation; and Renault (the parent company, as opposed to Renault F1) committed to making a significant contribution to FIA safety-related projects."

Explaining the decision to impose a two-year suspended ban, the FIA said: "The World Motor Sport Council considers Renault F1's breaches relating to the 2008 Singapore Grand Prix to be of unparalleled severity.

"Renault F1's breaches not only compromised the integrity of the sport but also endangered the lives of spectators, officials, other competitors and Nelson Piquet Jr. himself. The World Motor Sport Council considers that offences of this severity merit permanent disqualification from the FIA Formula One World Championship.

"However, having regard to the points in mitigation mentioned above and in particular the steps taken by Renault F1 to identify and address the failings within its team and condemn the actions of the individuals involved, the WMSC has decided to suspend Renault F1's disqualification until the end of the 2011 season. The World Motor Sport Council will only activate this disqualification if Renault F1 is found guilty of a comparable breach during that time."

The FIA has also taken tough action against Briatore and Symonds. It has been decided that for an 'unlimited period' the FIA will not sanction any event, championship, cup, trophy, challenge or series involving Briatore in any capacity – or grant any licence to a team or entity that is engaged with Briatore.

The statement added: "It also hereby instructs all officials present at FIA-sanctioned events not to permit Mr. Briatore access to any areas under the FIA's jurisdiction."

Briatore will also not be allowed to manage any drivers in F1, with the FIA stating that it will not renew any Superlicence granted to a driver who is associated with Briatore. At the moment Briatore manages Fernando Alonso, Mark Webber, Heikki Kovalainen, Romain Grosjean in F1.

"In determining that such instructions should be applicable for an unlimited period, the World Motor Sport Council has had regard not only to the severity of the breach in which Mr. Briatore was complicit but also to his actions in continuing to deny his participation in the breach despite all the evidence."

Symonds faces a similar ban for a period of five years – and will not be allowed at FIA-sanctioned events.

The statement added: "In determining that such instructions should be effective for a period of five years the World Motor Sport Council has had regard: (i) to Mr. Symonds' acceptance that he took part in the conspiracy; and (ii) to his communication to the meeting of the World Motor Sport Council that it was to his "eternal regret and shame" that he participated in the conspiracy."

Piquet himself apologised to the FIA for his involvement in the matter, and receives no punishment after being offered immunity in exchange for providing details about the matter.

The FIA also ruled that Alonso, who testified at the hearing, was not involved in the Renault race-fix matter.