THe motorsports fraternity is all abuzz with news of the MRF trio being relieved of their glorious podium sweep at this year’s INRC. 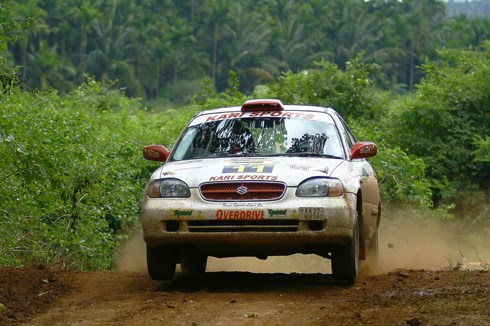 The motorsports fraternity is all abuzz with news of the MRF trio being relieved of their glorious podium sweep at this year’s INRC. Gaurav Gill (co-driver Moosa Sherif), Lohith Urs (co-driver G M Srikanth) and Arjun Aroor Rao (co-driver Satish Rajagopal) faced the fire as allegations of illegal modifications of lower arms on the red camp cars flew in the air.

As a result, the three Cedias were disqualified and fourth-place finisher G S Joshy (co-driver Chandramouli M) was promoted to the top spot of the overall podium, followed by Rahul Kanthraj (co-driver Vivek Bhatt) and Joseph C Jos (co-driver Royce Kizhakoodan) — all driving in 1600N class.

Team MRF appealed against the stewards’ decision, and a Indian Motor Sports Appellate Court (IMSAC) hearing took place in November. All eyes are now set towards December 20, when a judgement will be announced.

Under the state of affairs at the time of going to press, G S Joshy is the overall winner of the Coffee Day rally of Chikmagalur, making him the fifth different winning driver this season in as many rounds. The event, which was run on two stages run twice, consisted of a tight 11.45km Birur stage and a longer 15km university (or farm) stage.

Day 1
Freak showers kept everyone, including the organisers, on their toes and the first victim of the adverse conditions was RSC rally leader Karna Kadur (co-driver Somanita Ghosh), who went off the road barely two kilometres from stage start, losing almost 20 minutes in the process.

In the 1600cc class, tally leader Sujay S (co-driver Varun S) ran into problems as he lost brakes halfway into the first stage, having to manage with just the handbrake in the first two stages. At the end of the leg, Joshy comfortably led the field, followed by Jos and Kanthraj.

The 1400cc class saw tally leader Vikram Devadasen (co-driver Nikhil Pai) concentrating on finishing in points with his main rival Shailender Hegde (co-driver Sheraz Ahmed) out of contention in the first stage. Abhijeet Pai managed to distance himself early on but Devadasen started pushing things later. This saw Pai’s lead whittle away as he led the table by 16 seconds from Devadasen with Deepak Chinnappa in third at the end of Leg one.

In the RSC class, it was a duel between Phalguna Urs (co-driver Anoop Kumar) and Balram C G (co-driver Raghuram C G). The dark horse, however, was Karan A M (co-driver Somaiah A G) who was handed a three-minute penalty in the SSS as he was unable to finish after a hard landing off the jump ramp. Raghuram led the board from Phalguna after Leg one while Karan put in some blazing stage times compared to the top duo. But it Kadur who really pushed the envelope, looking determined to seal the championship.

Gypsy Cup tally leader Khushwant Randhawa (co-driver Ravindra M S) was in his element as he put over a minute and a half on his championship rival Sandeep Sharma (co-driver Anmol Rampal) of Team Thunderbolt, who was struggling with a damaged front diff. Shafeeq Ur Rahman (co-driver Ajith KP), captured a good initial pace, but post-service it was Sharma all the way. He put 36 seconds over Randhawa, leading the class after Leg one with Rahman in distant third.

Day 2
With Mathias out thanks to a five-minute penalty and unresolved gearbox troubles, Gill coasted with windows rolled down in the opening stage. The former took leg start but did not report to stage start citing ‘electrical issues’. Meanwhile, RRR also filed a protest against all three cars of team MRF, alleging illegal modifications on the rear suspension lower arms.

Amidst this, Lohith Urs showed the pace which had been missing throughout the season. He managed to catch up with Gill and nullify his entire overnight advantage, gaining almost two minutes at the end of the rally. The Mysore driver, however, took a three-minute early check-in penalty which put him behind his teammate. Arjun Rao took a lone third, wrapping up the 2000N+ and the overall podium.

The 1600class saga was wrapped up with élan by G S Joshy, outpacing Rahul Kanthraj who managed to make his way past the DDL Sports’ driver Joseph Jos, the latter settling for third. Sujay meanwhile sealed the championship by clocking the third-fastest time and picking up a leg point. Vikram Devadasen certainly wanted to finish things on a high to wrap up his championship glory, managing to outpace overnight leader Abhijeet Pai and climb atop the podium. With the latter having settled for second, it was finally Deepak Chinnappa’s podium spot with a third-place finish.

RSC championship leader Karna Kadur clocked fastest timings in Leg two and picked up three precious leg points which meant that despite Raghuram finishing first, he won the championship by a single point in his debut season! Karan A M managed to spoil Phalguna’s party, finishing second in class while the latter took the last spot on the podium.

In the Gypsy Cup, Sandeep Sharma managed to keep championship leader Randhawa away and won the class, also sealing his championship in the process. The latter had to settle for second, with Rahman in third.