This initiative will give young Indian riders a chance to aspire for the pinnacle of motorcycle racing. 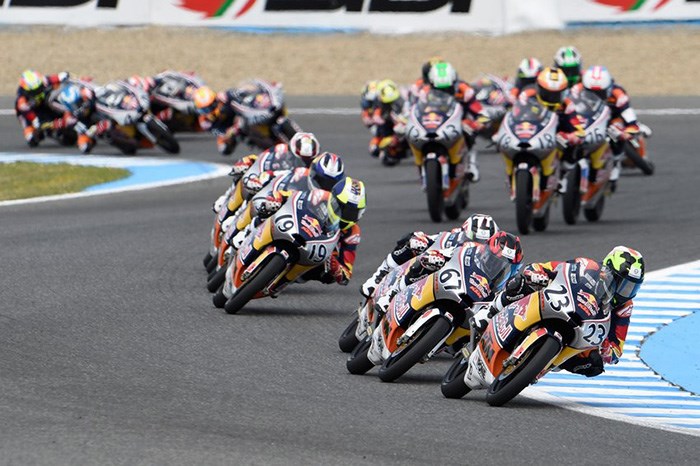 Red Bull has announced an Indian feeder series for his acclaimed Red Bull MotoGP Rookies Cup - which in turn serves as a feeder to the MotoGP Moto 3 championship.

This initiative will give young Indian riders a chance to aspire for the pinnacle of motorcycle racing - in a sport where opportunities to go up the ladder in the sport have been limited so far.

The first edition of the Indian 'Red Bull Road to Rookies Cup' as it has been christened, will see ten handpicked riders racing in a single-make championship, powered by Suzuki, over three rounds which will run as a support series to the national championship including the Suzuki Gixxer Cup and will use the same race-prepped Suzuki Gixxer SF 150 motorcycles.

Multiple National Motorcycle racing champion Rajini Krishnan will be one of the mentors for the young riders, along with several other instructors being roped in from India and abroad.

The top two finishers of the Indian Road to Rookies Cup will be taken to Europe from further training and the rider who emerges on top will get a shot at the Red Bull MotoGP Rookies Cup. The winner of the MotoGP Rookies Cup gets a sponsored ride in the Moto3 championship for the following season.

The announcement, for the Indian chapter, made yesterday in Chennai, also featured Lithuanian stunt-rider and two-time European stunt-riding Champion Aras Gibieza, on his nine-day Gixxer Day tour in the country.

“Red Bull Road to Rookies Cup is going to be of huge help to the young riders. It is a first time ever that we’ll have a category for 13-17 age group in India, in this sport. In India all riders start after the age of 20! I myself started racing at 20 – you only get your license at 18 – unlike Spanish and Italian kids who start at the age of 5 and have dedicated schools for training", said Rajini.

"I am hopeful that Red Bull Road to Rookies Cup will change things in the motorsport scene within India”, he added.

Gibieza remarked, “Red Bull Road to Rookies Cup comes as a great news for the Indian racers. This is my third visit to the country in the last two years and I can comfortably say that it’s high time we had a category for this age group”.